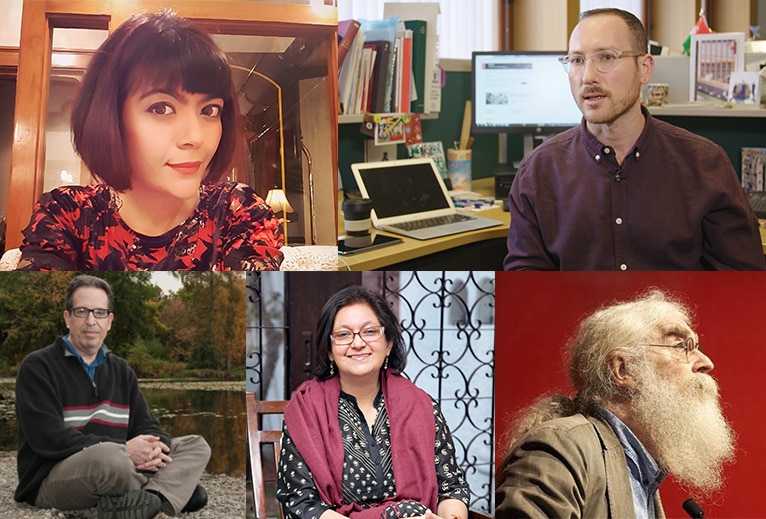 ZEEJLF at the British Library: From Hieroglyphs to Emojis

From carved stone inscriptions, medieval manuscripts and early printed works to beautiful calligraphy, iconic fonts and emojis, the written word has evolved in innumerable ways over the centuries. British Museum curator Irving Finkel, alongside technologist and calligrapher David Levy and scholar of Turkish historiography and one of the curators of the British Library’s exhibition Writing: Making Your Mark Michael Erdman deconstruct the act of writing and consider its future in the digital age, in conversation with journalist and editor Pragya Tiwari. Introduced by Namita Gokhale.

David Levy
David Levy is a professor at the Information School at the University of Washington where his work involves investigating the challenge of achieving contemplative balance. His latest book is Mindful Tech: How to Bring Balance to Our Digital Lives.

Irving Finkel
Irving Finkel studied Assyriology at the University of Birmingham and has worked at the Oriental Institute of the University of Chicago. He has been a cuneiform tablet curator at the British Museum in London since 1979. His interests lie in ancient magic, medicine and all aspects of ancient cuneiform literature. His work also spans the history of the world’s board games. As well as writing professionally, he also publishes fiction for adults and children. He is the founder of the Great Diary Project.

Michael Erdman
Michael Erdman is one of the curators of the exhibition ‘Writing: Making Your Mark’ at the British Library, where he also manages the Turkish and Turkic Collections. He was awarded a PhD at SOAS in 2018 and specialises in the study of 20th century Turkish and Central Asian historiography.

Pragya Tiwari
Pragya Tiwari has edited publications such as Vice and Tehelka, and writes on politics, culture and public policy. She also works as a public policy consultant with NGOs and corporate organisations.