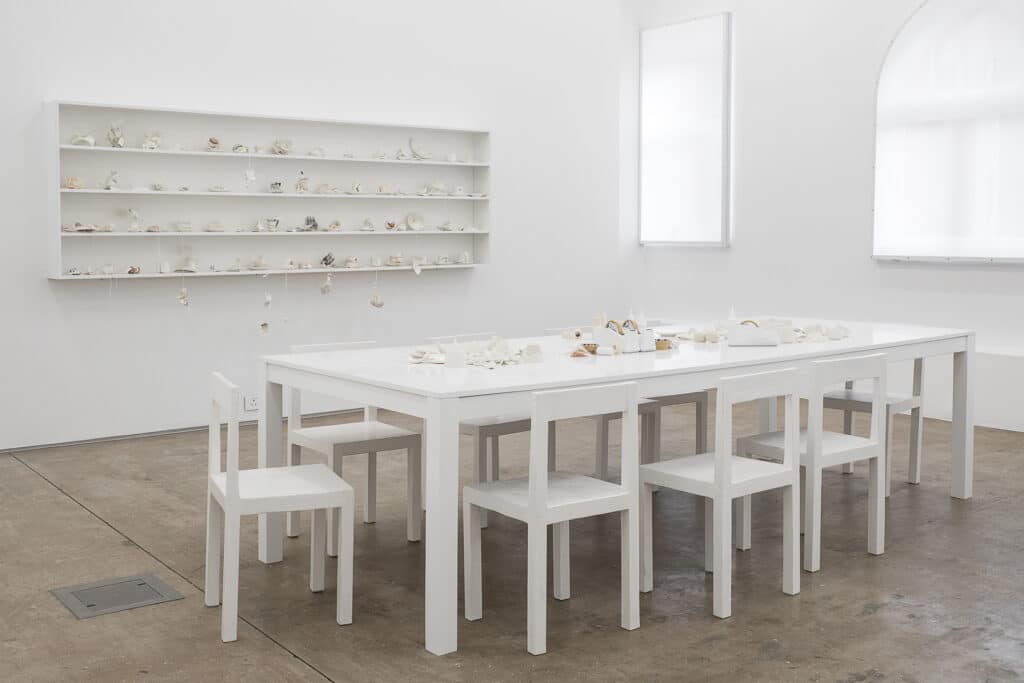 Whitechapel Gallery presents the iconic installation Mend Piece by Yoko Ono and invites you to ‘mend the world’ this autumn with the world-famous artist, musician, and activist.

Upon entering the performative installation, Mend Piece, participants are met with a set of simple instructions: ‘Mend carefully. Think of mending the world at the same time.’ Following the artist’s direction, visitors are welcomed to sit at two long tables where broken fragments of ceramic cups and saucers are presented for repair with scissors, glue, twine and sticky tape. When finished, the ‘mended’ objects are displayed on adjacent shelves.

Ono first presented her iconic installation in London more than 50 years ago as part of her 1966 solo exhibition at Indica Gallery, a renowned centre for countercultural art. At this time, many of Ono’s artist peers were exploring the techniques and ideas of destruction in their work, partly in response to the destructive politics of the US Vietnam War and the threat presented by the Cold War. In this context, Ono’s invitation to ‘mend’ was radically constructive.

Today the contemplative act of mending offers a healing respite from the tumultuous concerns of society. Mend Piece draws on the Japanese philosophy of Wabi Sabi, which embraces the beauty in imperfection; for the artist, reparation starts by recognising a flaw or fracture within one’s self or community. The act of reconstruction then becomes a metaphor for a different kind of healing which takes place in the mind and through communal work.

To ensure visitor safety and peace of mind, the installation at Whitechapel Gallery has been designed to accommodate social distancing. The fragments will be regularly sanitised and a member of staff will be available at all times to assist.

At the end of the exhibition, select pieces will be given to the artist’s studio to mark the return of Mend Piece to London in 2021 and commemorate the city’s collective handiwork.

Yoko Ono was born in Tokyo in 1933 before moving to the US with her family in the mid-1950s. After graduating from Sarah Lawrence College, she quickly became a catalytic figure within the avant-garde music scene in New York, hosting an influential series of concerts and art installations in her downtown loft featuring the likes of Simone Forti, Jackson Mac Low, Robert Morris and La Monte Young. Over the ensuing decade she lived in New York, London and Tokyo, influencing the development of both Fluxus and Conceptual art, through her instruction, film and performance-based work. From the late 1960s she collaborated with husband and musician John Lennon on experimental pop music releases and anti-Vietnam war campaigns that imaginatively took advantage of her growing international fame. In more recent years she has made full use of digital and social platforms to promote activist causes, always rooted in messages of peace and universal creativity. . In 2009 she received the Golden Lion award at Venice Biennale for lifetime achievement.

For over a century the Whitechapel Gallery has premiered world-class artists from modern masters such as Pablo Picasso, Jackson Pollock, Mark Rothko, Frida Kahlo and Hannah Höch to contemporaries such as Zarina Bhimji, Sophie Calle, William Kentridge, Eduardo Paolozzi and Michael Rakowitz. Its historic campus houses exhibitions, artist commissions, collection displays, historic archives, education resources, inspiring art courses, talks and film screenings, the Townsend dining room and the Koenig Bookshop. It is a touchstone for contemporary art internationally, plays a central role in London’s cultural landscape and is pivotal to the continued growth of the world’s most vibrant contemporary art quarter.

Yoko Ono: MEND PIECE for London is supported by the Bagri Foundation.