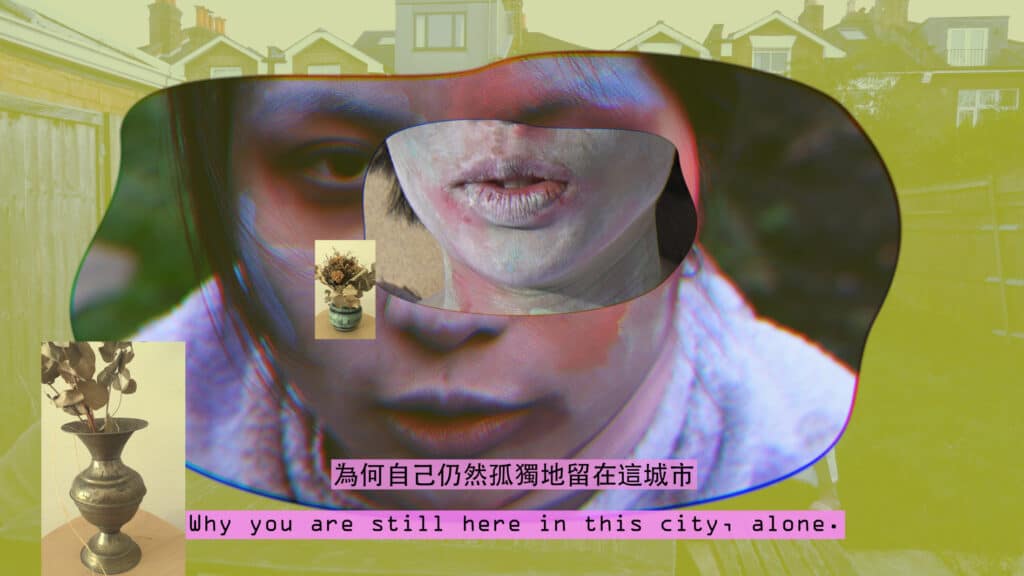 In this panel, the curators of Till We Meet Again IRL, Annie Jael Kwan, Arianna Mercado, Cuong Pham and Howl Yuan, exchange thoughts with exhibiting artists Yarli Allison, Bettina Fung, and Caro Gervay on the transition (and struggles) between “in real life” exhibition-making and going digital. Even before the pandemic, art has helped us connect with each other, in different spheres, across time, language, and geographies. Yarli, Bettina, and Caro weigh in through their work shared on Till We Meet Again IRL with varied mediums: moving image, performance, and photography; in relation to their investigations into different histories – archives, diaspora artists, mental health and communities, and notions of home and returning. In what ways have specific art practices changed and morphed after nation-wide restrictions and a critical rethinking of the way we operate within the art world?

Bettina Fung | 馮允珊 is a Hong Kong born, British-Chinese artist based in London. Her practice centres on the expansive and immediate nature of drawing and often performs live, sharing her process as the work unfolds over time. She creates two dimensional, performative and site specific works. Themes of ritual, futility, purposelessness and notions of belonging, productivity and progress are subjects of interest. Bettina’s background is in computer animation. She gained her degree in Bournemouth University (NCCA) in 2005, where her animated short Sushi was screened at film festivals in the UK and Australia. She has since worked as a video editor and now fully dedicates herself with her artistic practice. Bettina has exhibited throughout London, nationally and abroad. She was a recipient of the a-n Artist Information Company’s New Collaborations Bursary in 2014 to carry out collaborative research in combining traditional drawing methods with interactive design technologies. In 2018, she was awarded Arts Council England’s Grants for the Arts award in supporting her solo exhibition, Imprints of Passing Time, at Surface Gallery in Nottingham, UK. Having a keen interest in artist-led development and learning, Bettina took part in Syllabus IV, an alternative peer led artist development and learning programme delivered by six UK arts institutions: Wysing Art Centre, Spike Island, Studio Voltaire, Iniva, S1 Artspace and Eastside Projects. Bettina is also an Associate Member of the Asia-Art-Activism Research Network. Selected performances and exhibitions include: Manchester Art Gallery, UK; Eastside Projects, Birmingham, UK;  Guest Projects, London, UK; Surface Gallery, Nottingham, UK and Draw to Perform 2&3: International Symposium of Drawing Performance, London, UK; Art Central Hong Kong; The Pier-2 Art Centre, Kaohsiung, Taiwan; Festival Vrrrr, Musée d’Art, Toulon, France.

Caro Gervay is a London-based artist working across analogue photography, sound, performance, video and participation. Through collective experimentations of writing, drawing and painting with light, her practice inquires into the underlying violence and the roles played by the photographic medium in relation to belonging and transmission. This process is informed by the histories of colonialism, personal stories and present socio-political contexts and concerns. Going back and forth between family archives, conversations and the red lights of the lab, the photographer asks questions of the many “we” – we (could) belong to and how photographs have defined us. Going through layers of masks, shadows, erasure and silence, her work points at the ruptures in transmission affecting diaspora communities, in her case as a woman of Vietnamese heritage. In the past ten years she has worked in the UK, France and Vietnam exploring photography as a performative process that produces new spaces of reflection and potential for belonging and critical action. ‘Writing with light” allows a relationship to the world and a performance where time slows down and people come together, bringing the process of revealing images into play with memory-or loss of it. She is a director of the community darkroom the Gate Darkroom in Woolwich and an associate of Asia Art Activism. Long term collaborations include: Fotosynthesis, Phakama, Clayground Collective, Compagnie Amonine (theatre).

Cường Phạm is a London-based researcher, community activist, and not very occasional writer. He finds himself trying to constantly negotiate and situate his self in relation to cultural identity, movement, sites of community and geographical spaces. He holds a Master’s in Southeast Asia studies at SOAS, where his thesis explored the Vietnamese diasporic experience through hip-hop. Through his work at the grassroots, he has co-curated ‘Record, Retrieve, Reactivate’ (An Viet Foundation) and ‘Resettled Spaces’ (Lien Viet) which explored the history, memory, and language of the East and South East Asian migration experience. He is currently in the process of setting up an archive of British-Vietnamese documents, photos, and other artefacts relating to the British-Vietnamese experience. Cường is also the co-founder of Indigo Magazine, a platform for new voices in/from Southeast Asia and beyond. Under the handle phạmbinho 范悲儒, he also hosts a monthly show NTS, an independent online radio platform. In which he, and occasional guests, attempts to musically reframe ‘Asia’ as a contested paradigm. He has also appeared on BBC Asian Network, Netil Radio, Dublab, no10.as, DSTRACKTD, A:\files, he has performed at Tate Modern and alongside collectives/labels Eastern Margins, Chinabot, Rumah Fest and Gãy and has/had other projects with SOAS, AAA Radio, and East Asian Ticket Club x Royal Court.

Howl Yuan (原承伯) is a Taiwanese, Bristol-based performance maker, writer, curator, researcher and alternative podcast host. He holds a Master’s degree in performance (theatre) from University of Chichester, and is a Ph.D. candidate at University of Exeter. His practices focus on cultural identity, mobility, migration, sites and places. His works and projects have been presented in numerous venues and festivals across Taiwan and the UK, such as Camden People’s Theatre, The Wardrobe Theatre, Marlborough Theatre, Exeter Phoenix, Spill Festival, Migration Matters Festival, and Chinese Arts Now Festival in the UK; and The Guling Street Avant-garde Theatre, The Pier-2 Art Centre, Acid House, Taipei Contemporary Art Centre, and Taroko Arts Residency Project in Taiwan. Howl also curates and initiates different projects. One of them is Artists Home Swap, a performance arts exchange program between Taiwan and the UK. AHS highlights crossing cultural values in artistic influence to communities; and aims to open up the intercultural dialogues by artists and artworks. In addition, he is the guest curator in Migration Matters Festival 2020-2021. Howl’s writing appears on Performing Arts Forum (Macao), LAC studio (China), and Centre for Contemporary Asian Art (Australia). He is also one of the core members and host for the performing arts podcast Ming Strike.