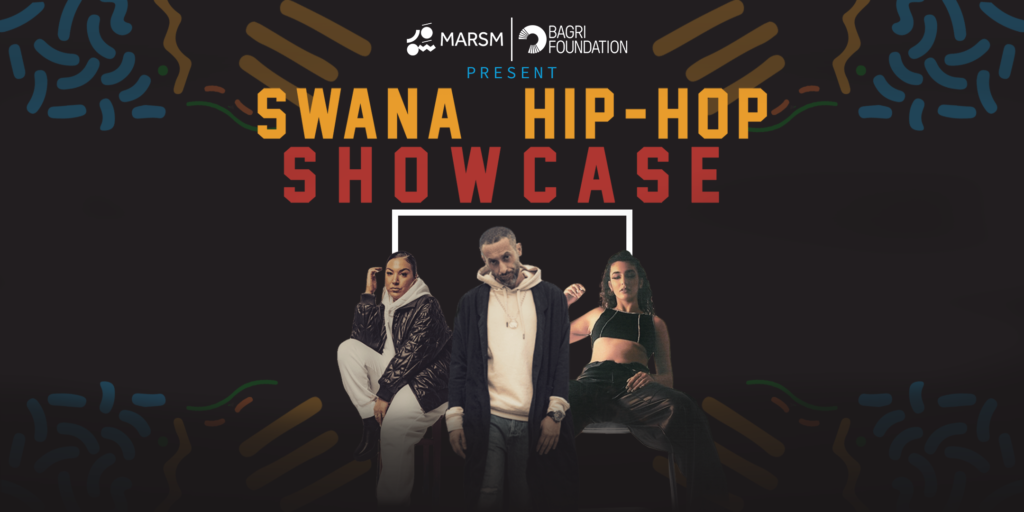 A stellar night of hip-hop, beats and grime is brought to you by the pioneering Palestinian rapper Tamer Nafar, the London/Iranian grime songstress Shay D and Moroccan/French rapper and singer-songwriter Rita L’Oujdia.

Brought to you by the Bagri Foundation and Marsm UK, this concert is the third in a series of events that looks to explore the contemporary evolution of rap, hip hop, trap and electronica in SW Asia and North Africa.

Tamer Nafar is a musician, actor, screenwriter, and social activist well-known for his founding role in DAM, the first Palestinian rap crew who have since become a household name in the region. Alongside this, Tamer’s solo career has become a powerful offshoot of his music and message. Bringing flawless energy to his performances, his hard-hitting hip hop and tongue-in-cheek humour have landed him as one of the most innovative rappers from the region and dubbed ‘The Godfather of Palestinian rap’. More recently releasing a combination of both English and Arabic tracks Tamer’s topical tracks never fail to move the mind and the body.

SHAY D Hailing from the stomping grounds of North London, Shay D’s upbringing and Persian heritage remain at the core of her sound. Her latest album ’Speaking in Tongues’ has solidified her penchant for grime and follows the success of her second album ‘Human Writes’ which she released independently in 2019, making her way onto the iTunes Top 20 Hip Hop chart. She also curated the first-ever all female hip-hop tour in the UK, ‘Queens of Art’ in 2019 & 2020 visiting 10 cities nationwide. Championing women in music, she established her name within the underground UK Hip Hop and grime circuit, while working as radio presenter and DJ alongside her youth and community work and has featured on BBC 1xtra Live Lounge, Redbull TV & Channel 4 as well as working on projects with Nike and Yamaha.

Rita L’Oujdia Born in Oujda (Morocco) and raised in France, Rita L’Oujdia is a self-taught singer, songwriter and producer. Speaking English, French, Moroccan, Spanish and Portuguese, she has released songs in these multiple languages, praising self-love, confidence, inspired by her own life experience but not only. After studying Baroque music since the age of 4, she recently graduated from the Conservatory in Lyon. Proud of her cultural heritage, L’Oujdia is incorporating more Arabic lyrics and influence in her songs, and aims to use the broad spectrum of musical influence she grew up with to create songs with a unique and personal sound.

Marsm is an events company that promotes the rich and diverse musical cultures of the Arabic-speaking world across the UK. London-based concert producer and organiser for alternative and underground Arab music events in the UK: from hosting some of the biggest names in the region to emboldening the burgeoning underground music scenes, Marsm supports the exceptional creativity and talent of artists across the Arabic-speaking world. With events spanning from hip-hop and rock to Mahraganat, Dabke and Sufi, we challenge the dogmas of cultural production and present an established UK platform for SWANA arts and culture in its original spirit.