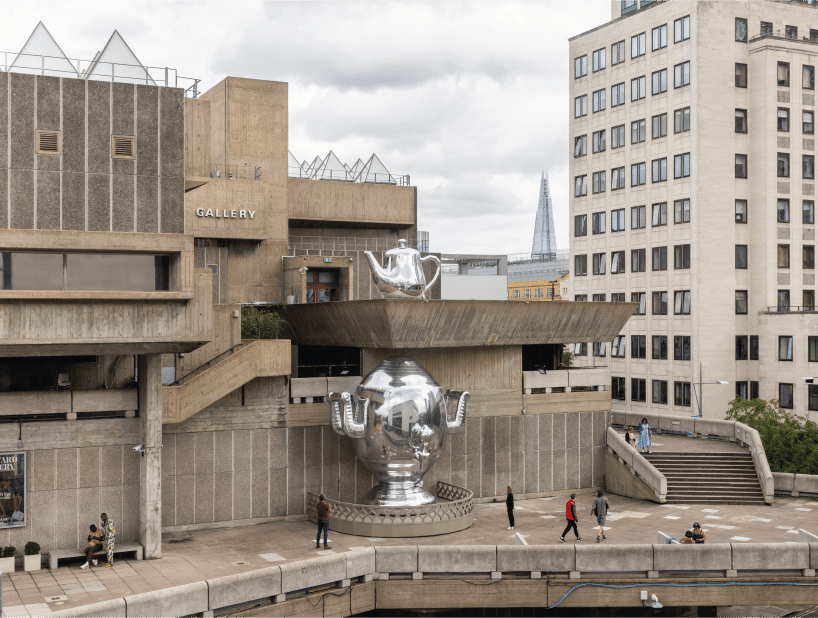 Taking the form of an oversized inflatable water boiler, teapot and serving tray lodged into the side of the Hayward Gallery, the sculpture created by the collective Slavs and Tatars, Samovar, is titled after the eponymous tea brewer commonly found across Central Asia.

A Russian invention of the mid-18th century, samovars are used today across Eastern Europe, the Middle East and some parts of Asia, in both domestic and communal settings.

Although humorously enlarged like a mascot or parade float, Slavs and Tatars’ installation uses the samovar as an emblem to recount the ways in which the history of tea is intertwined with cross-cultural exchange and colonialism.

By creating a monumental symbol of a celebrated and long-established tea culture, the artwork questions the role of tea in British history, tradition and popular culture.

Samovar is the first of the three annual Bagri outdoor commissions presented in partnership with Hayward Gallery (2021-23).

Read more about the commission and the partnership here.

About Slavs and Tatars

Slavs and Tatars is an internationally renowned art collective devoted to an area East of the former Berlin Wall and West of the Great Wall of China known as Eurasia. Since its inception in 2006, the collective has combined popular culture, spiritual and esoteric traditions, oral histories, modern myths and scholarly research to explore polemical issues in society and clear new paths for contemporary discourse. Imbued with humour and a generosity of spirit, the collective’s practice, which spans installations, sculptures, lectures, and printed matter, questions one-dimensional ways of seeing relationships between science, religion, power and identity. Their work has been the subject of solo exhibitions at the Museum of Modern Art, NY; Salt, Istanbul; Vienna Secession, Kunsthalle Zurich and Albertinum, Dresden, among others. Slavs and Tatars has published more than ten books to date, including Wripped Scripped on language politics; as well as a translation of the legendary Azerbaijani satirical periodical Molla Nasreddin. In addition to launching a residency and mentorship program for young professionals from their region, Slavs and Tatars recently opened Pickle Bar, a slavic aperitivo bar-cum-project space a few doors down from their studio in Moabit, Berlin.