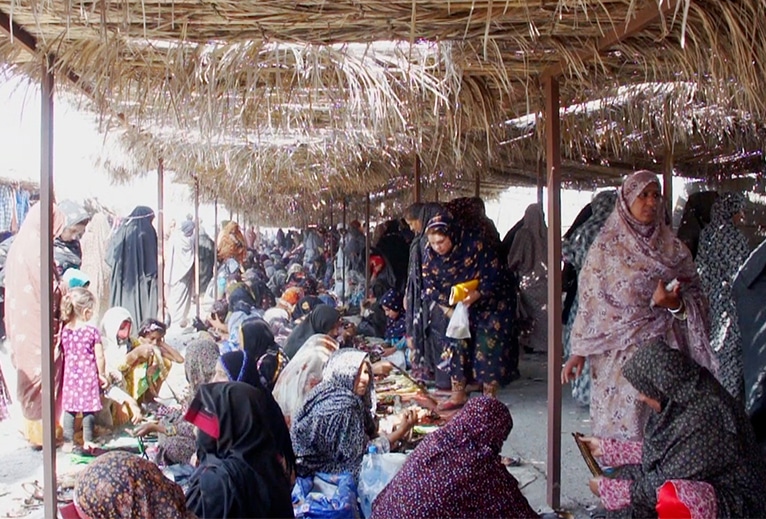 A young entrepreneur and mother living in Minab, on the Southern coast of Iran, Roghieh’s quest to establish a much-contested women’s bazaar is the subject of this observational documentary.

In Southern Iran, it is said that the mythical Damahi fish swims out in stormy weather to guide seamen safely back to the shore. Roghieh’s drive to enable local women to have stable jobs selling food and handicrafts in a unionised space takes inspiration from its courage.

“Every one of us has a piece of the Damahi inside of us.” Roghieh states, as she walks along the shore.

Interspersed with moments of colourful animated illustration, imbued with textures of the sea, and of women, this documentary draws from with the rich traditions of the region to celebrate an everyday hero.

A champion of strong female voices, Mina Keshavarz’s portrait highlights the beauty with which Roghieh expresses herself – her language is full of imagery and metaphor, her resolve is stoic and grounded, as she strives to better the lives of women in her country. Keshavarz was one of the filmmakers behind the celebrated and beautiful multi-authored documentary Profession: Documentarist, in which she was one of seven female filmmakers in Iran, reflecting on the narratives they have had to suppress.

The film merges observational footage with a poetic voice over, told over panels of animated painting, in which the film’s central character, Roghiyeh, reflects on her situation. Poets Amy Key, Martha Sprackland and Will Harris have been given literal translations of Roghiyeh’s narration, from which they will write new poetry – their work will reflect on her words, rather than on the film. Reflecting on the poetry of Roghiyeh’s language, the commission looks to play on and take shape from her words, to bring an English-speaking, UK audience closer to the poetry of her expression.

All poets have confirmed that they will be attending this screening, to read their work in person.

Amy Key’s debut poetry collection Luxe was published by Salt in November 2013. Her poems have been published in various magazines and anthologies including Poetry, The Poetry Review, Best British Poetry 2015, Love Poems (Faber & Faber) and The Poetry of Sex (Penguin). Between Summer 2018 and Spring 2019, Amy, alongside Rebecca Perry, are poets in residence at Halsway Manor, the National Centre for Folk Art.

Will Harris is a writer of mixed Anglo-Indonesian heritage, born and based in London. He has worked in schools, led workshops at the Southbank Centre and teaches for The Poetry School. He is an Assistant Editor at The Rialto and a fellow of The Complete Works III. His first full poetry collection, RENDANG, is forthcoming from Granta in 2020.

Martha Sprackland is a writer and editor. She was co-founder and poetry editor of Cake magazine, was assistant poetry editor for Faber & Faber, and is one of the founding editors of multilingual arts magazine La Errante. Twice a winner of the Foyle Young Poets of the Year Award, she was also the recipient of an Eric Gregory Award from the Society of Authors, and was longlisted for the inaugural Jerwood–Compton Poetry Fellowships in 2017.