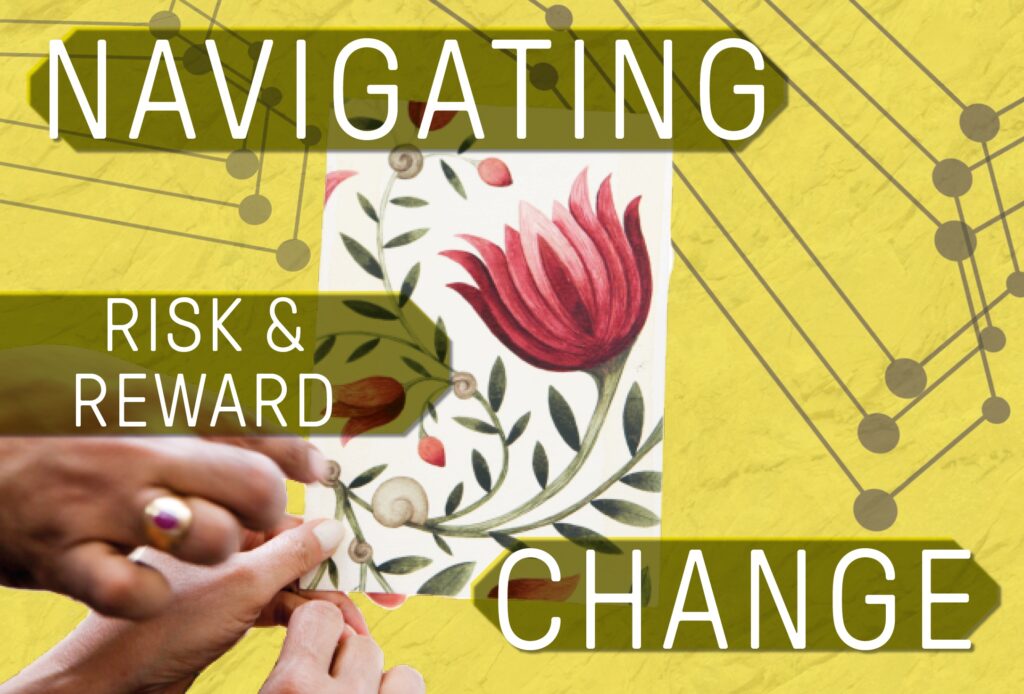 The third and final panel of the Bagri Foundation series Navigating Change hosts community organiser and curator Adriel Luis, philanthropist John Studzinski, and gallerist and collector Amrita Jhaveri for a multidisciplinary conversation on how they have embraced positive and meaningful change into their life and practice in the past year with a focus on how we can re-think success and support in a time of crisis.

The Navigating Risk and Reward panel recording is released on Tuesday 25th May 2021 at 12pm on the Bagri Foundation Youtube channel.

Sign up to Eventbrite at the Register link on the right, to receive event reminders.

Amrita Jhaveri has been involved with the commercial art world in India since the early 1990s. She established Christie’s office in India and initiated auctions of modern and contemporary Indian art. In 2000 Jhaveri moved to London and began working with private collectors and museum curators on aspects of Modern and Contemporary South Asian Art. As an independent advisor, Amrita has created and managed private and corporate art collections; ambitious artist projects and large-scale commissions. In 2010 she founded Jhaveri Contemporary in Mumbai. The gallery represents artists, across generations and nationalities, whose work is informed by South Asian connections and traditions. An exhibition maker at heart, Amrita co-curated ‘Thinking Tantra’ at Drawing Room, London (2016 -17) and South Asian Modernists 1953-63 at the Whitworth, Manchester (2017-18). Jhaveri sits on the Advisory boards of Khoj (New Delhi ), Museum of Art and Photography (Bangalore) and Drawing Room (London).

Adriel Luis is a community organizer, artist, and curator who believes in collective imagination as a pathway toward liberation. His life’s work is focused on bridging artistic integrity and social vigilance. He is a part of the iLL-Literacy arts collective, which creates music and media to strengthen Black and Asian American coalitions; is creative director of Bombshelltoe, which works with artists to highlight marginalized communities affected by nuclear issues; and collaborates with dozens of artists and organizations through his curate and design engine, Phenomenoun. Adriel is the Curator of Digital and Emerging Practice at the Smithsonian Asian Pacific American Center, where he advocates for equitable practices in museums and institutions. He and his team curate Culture Labs — an alternative to museum exhibitions, built on community-centered beliefs. Adriel’s ancestry is from Toisan, China, and his family’s migration traces Hong Kong, Mexico, and the United States. He currently lives on Tongva-Chumash-Kizh-Gabrielino land (Los Angeles).

John Studzinski CBE is founder and chairman of the Genesis Foundation. Since 2001, the Foundation has supported programmes that nurture the careers of outstanding young artists in the UK, enabling them to develop their professional skills and experience and gain access to mentors and valuable networks. He is Managing Director and Vice Chairman of global investment management firm PIMCO, and his 30 years in investment banking have also embraced senior roles at Blackstone, HSBC Group and Morgan Stanley. Born in the US and long resident in Britain, he holds an MBA from the University of Chicago and a bachelor’s degree from Bowdoin College.

As a hands-on philanthropist and as a thought leader, John Studzinski focuses primarily on the arts, human rights, homelessness and volunteering. He is Founding President of Arise, which was established in 2015 to support frontline work against modern slavery. This role complements his activities to promote transparency in business supply chains, which have included a period as co-chair of the Home Office’s Business Against Slavery Forum. Awarded a CBE in 2008 for his services to the Arts and Charity, John Studzinski has also received the Papal honours of Knight of the Order of St. Gregory and Knight Commander of St. Sylvester, the Montblanc de la Culture Arts Patronage Award, the Beacon Prize for Philanthropy, the Prince of Wales Medal for Arts Philanthropy and, for his work with the homeless, the Prince of Wales Ambassador Award. In 2017 the Catholic Herald named him Catholic of the Year.