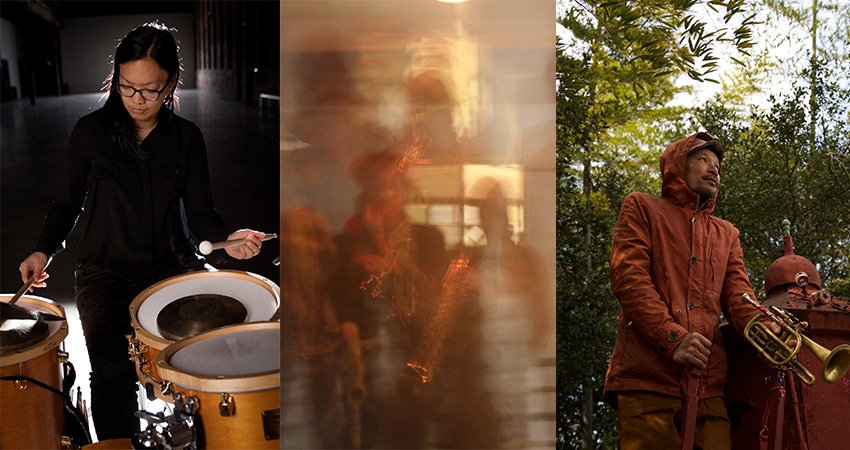 At the Cutting Edge: Experimental Sounds of Asia is a series of concerts celebrating new music from across Asia and the diaspora, performed by natural collaborators and influenced by cross-arts forms. Read more about the programme on our projects page here.

The first night will see a night of improvisation and exploration. The acclaimed, avant-garde Filipina-American composer, percussionist, and sound artist Susie Ibarra, will perform a set of pieces built around rhythmic cycles; a type of meditation which will weave through tempos, melodies, textures and phrases that move through various rhythms and polyrhythms. Susie has only performed in the UK once before so this will be a rare chance to see her incredible live set.

The Arizona-based band Sunn Trio will play an improvised jazz and desert-rock set, experimenting with the Afghan instrument, the Rubab, alongside a guest musician. Inspired by Indo-Arabian sounds and Middle Eastern guitar music, the band is headed up by guitarist Joel Robinson and takes many forms from solo to quartet to a sextet, depending on the space. The concert also coincides with the release of their latest album.

One man band extraordinaire ICHI, from Nagoya in Japan, will give a live performance using his own quirky homemade instruments. These often include (Stilt-bass, Kalilaphone, Balloon-pipes, Hatbox-pedal-drum, Tapumpet, Percussion-shoes and Hattrick-hat) with steel-drum, ping-pong balls, typewriter, toys and everyday objects. To see ICHI live is to witness something so playful and unusual you know that you’re experiencing something entirely new, it is fun it is danceable, it is exciting.

Susie Ibarra is a Filipina-American composer, percussionist, and sound artist. Her sound has been described as “a sound like no other’s, incorporating the unique percussion and musical approach of her Filipino heritage with her flowing jazz drumset style” (Modern Drummer Magazine) and her compositions are sometimes described as “calling up the movements of the human body; elsewhere it’s a landscape vanishing in the last light, or the path a waterway might trace” (New York Times). Recent commissions include Kronos String Quartet’s 50 for the Future Project Pulsation, PRISM Saxophone Quartet + Percussion’s Procession Along the Aciga Tree, Talking Gong trio with pianist Alex Peh and flautist Claire Chase, film score When the Storm Fades directed by Sean Devlin, and an interactive performance  Fragility: A Game of Polyrhythms commissioned by Asia Society NY.

Susie Ibarra is a 2019 United States Artist Fellow in Music. She is a 2018 Asian Cultural Council Fellow in support of her sound research of An Acoustic Story on Climate Change: Himalayan Glacier Soundscapes. She is recording and researching sound along the Ganges from source to sink in collaboration with glaciologist and geomorphologist Michele Koppes. Ibarra leads the DreamTime Ensemble, which recently released the album Perception, a suite of music exploring memory and shifting sensory experiences. She performs in collaborative ensembles Mephista, Yunohana Variations, and LIMBS. Since 2012, she has been a faculty member at Bennington College where she teaches percussion, performance, improvisation, and art intervention. Ibarra is a Yamaha, Vic Firth, and Paiste Drum Artist.

Sunn Trio hail from Phoenix, Arizona, surrounded by deserts like the Middle Eastern guitar music that is one of the notable influences on their sound, along with free jazz and harsh exotica and touchstones as disparate as Sonny Sharrock and Thinking Fellers Union Local 282. In the words of Alan Bishop, “Wielding Indo-Arabian Saz and white lightning six-string shrapnel amidst an alligator snapping turtle’s rhythm section, this trio-quartet-sextet may also sprout horns, flutes, animal skins, or shadow gamelan to faithfully demolish that whiny and predictable listening experience of today’s tepidly lazy, underachieving experimental music scene.”

ICHI, from Nagoya in Japan, takes the notion of a one-man band to new limits, combining his quirky handmade instrument inventions (Stilt-bass, Kalilaphone, Balloon-pipes, Hatbox-pedal-drum, Tapumpet, Percussion-shoes and Hattrick-hat) with steel-drum, ping-pong balls, typewriter, toys and everyday objects all in the space of one short set. Somehow there’s an ancient, ritualistic feel to his performances – he’s like the misplaced leader of a tribe. With his simple concepts and playful presentation ICHI has universal appeal and tours extensively as a solo artist in Japan, the UK, Europe, and further afield. He has played at many festivals worldwide including End of the Road, Latitude, Glastonbury, Greenman, Fusion (Berlin), Clockenfrapp (Hongkong) and Wordless Music Festival (New York). He is championed by the likes of Late Junction’s Nick Luscombe, Lauren Laverne and Cerys Matthews. His newest album Maru and recent single Week have been released on Lost Map (UK) and Sweetdreams Press (Japan).  He is a practicing and exhibiting artist and filmmaker. He has exhibited in London with fellow musicians-come-artists Francois Marry (Francois and the Atlas Mountains – Domino), Alessi’s Ark (Bella Union), Kate Stables (This is the Kit – Rough Trade), Rozi Plain (Lost Map) and Rachel Dadd (Talitres). He is also half of ((( On Pa ))), teaming up with contemporary folk artist Rachael Dadd.