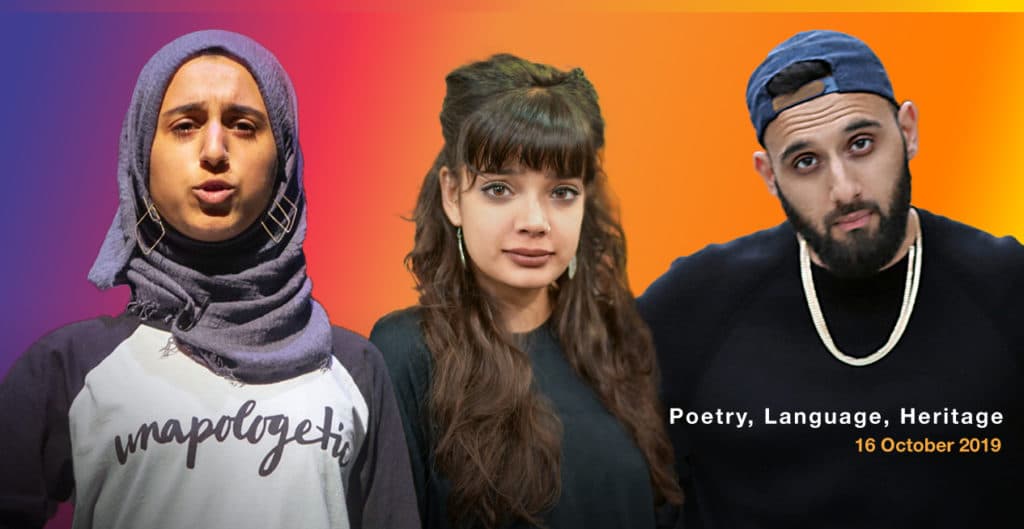 Zohab Khan will be your host and main feature for the night. In his first full UK performance, Zohab will take you on a poetic journey sprinkled with Urdu, Punjabi and heritage. Suhaiymah, Shareefa and Zohab have all made homes upon their pages and will let roar their voices on the stage.

Zohab Khan is an educator, motivational speaker, poet, didgeridoo player and hip hop artist. Since 2006, Zohab has been building a formidable career in spoken word poetry, culminating in taking the title of Australian Poetry Slam Champion in 2014. Having conducted over a thousand poetry and self development workshops across the globe, he has inspired change and confidence in countless people through his high energy spoken word poetry and brain hacks. In 2015 he co-founded The Pakistan Poetry Slam. His first poetry collection ‘I Write’ reached bestseller status in Australia within months of its release and 2019 marks the release of his first self-development book for teenagers.

Suhaiymah Manzoor-Khan is an educator, writer and spoken-word poet. She is the founder and author of the critical and educative blog, www.thebrownhijabi.com, and co-author of A FLY Girl’s Guide to University: Being a Woman of Colour at Cambridge and Other Institutions of Power and Elitism (Verve Poetry Press, 2019). With a background studying History and Postcolonial Studies, as well as a wider education from her mother and grandmother’s wisdoms, the epistemology of Islam, and work of women of colour and anti-systemic thinkers from across the world, Suhaiymah’s poetry is unapologetically political and deliberately unsettling. Her poetry has over two million online views and since going viral as runner-up of the 2017 Roundhouse National Slam with her poem, This Is Not a Humanising Poem, she has performed on BBC Radio stations, at music festivals, in the US against Californian slam poets, across British Universities, on Sky TV, ITV, the Islam channel, Las Vegas, TEDxes, London poetry nights, mosques, protests outside the Home Office, in New York, Berlin and at Da Poetry Lounge in Los Angeles.

Shareefa Energy is a spoken word poet, writer, mentor and workshop facilitator. Her poetry is raw, honest and consistent against injustice. Witnessing her performing has been described as an almost religious experience. She was awarded with the UK Entertainment Best Poet 2017 Award. She released her spoken word neo-soul jazz EP ‘Reasoning with Self’ in 2015. Her poetry has featured on BBC One, Channel 4 and ITV. Shareefa performed at Poetry Meets Hip Hop in Berlin, the Verve Festival and has facilitated creative writing poetry workshops internationally, from Palestine to Sierra Leone. She was artist in residence at North Kensington Library for the Apples and Snakes Spine Festival 2018 and 2019. She is a member of the UK female South Asian poetry collective The Yoniverse. Her debut poetry collection is being published by Burning Eye Books this Autumn 2019.