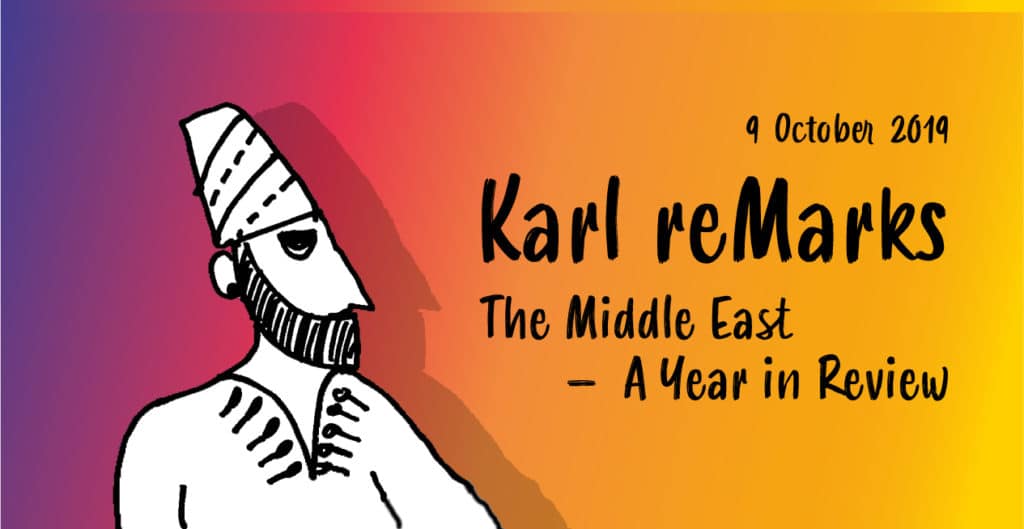 Karl Sharro, the political and cultural online sensation behind the popular Twitter handle @KarlreMarks, will take a look back at the media’s depiction of key moments in the Middle East this year. Analysing the topical news and views of 2019, Karl will bring his wry observations and witticisms to a discussion with British-Lebanese writer Nasri Atallah.

This event will include audience Q&A and book signing.

Karl reMarks is a Middle East political and cultural online commentary with frequent forays into satire. It is written by Karl Sharro, whose work has been featured in the BBC, Al-Jazeera, The Economist, Ted-X Talks, Wall Street Journal and Guardian among others. In 2016 Karl’s video ‘the simple one-sentence explanation for what caused Isis,’ went viral, with 1.6 million views on Facebook alone. Alongside his role as a satirist and commentator on the Middle East, Karl has practised architecture in London and Beirut.

Nasri Atallah is a British-Lebanese writer, television documentary presenter and producer. His writing has appeared in GQ, The Guardian, Little White Lies & Monocle, amongst others, and he is a regular guest on the BBC’s The Arts Hour.