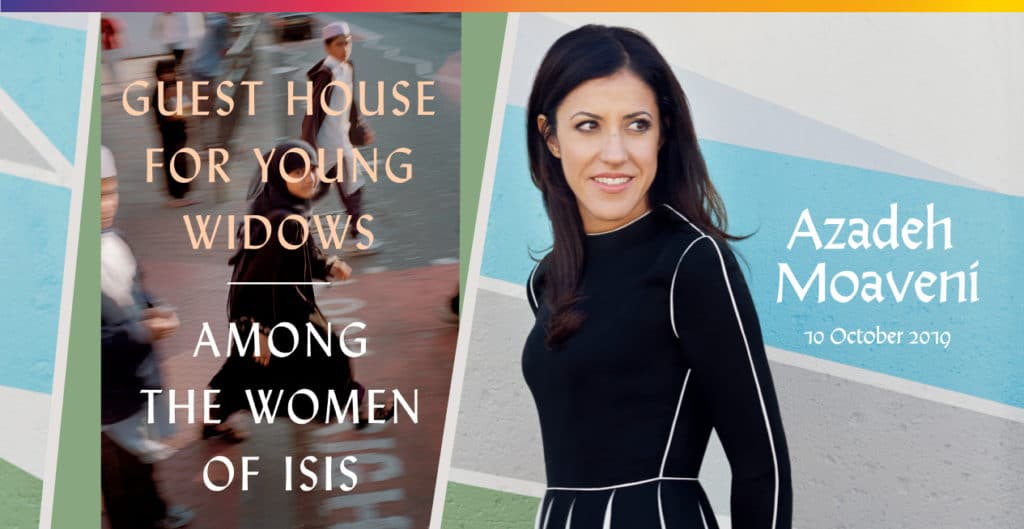 Based on years of immersive reporting, Pulitzer finalist Azadeh Moaveni has written a gripping account of thirteen women as they joined, endured and, in some cases, escaped life in the Islamic State.

On the date of publication, join us for the launch of Moaveni’s new book: Guest House for Young Widows: Among the Women of ISIS.

Women were essential to the establishment of Abu Bakr al-Baghdadi’s caliphate, but among the many books trying to understand the terrifying rise of ISIS, none have given voice to the women who were part of it.

Responding to promises of female empowerment and social justice, and calls to aid the plight of fellow Muslims in Syria, thousands of women emigrated from the United States and Europe, Russia and Central Asia, from across North Africa and the rest of the Middle East to join the Islamic State. These were the educated daughters of diplomats, trainee doctors, teenagers with straight-A averages, as well as working-class drifters and desolate housewives, and they set up makeshift clinics and schools for the Islamic homeland they envisioned.

What is the line between victim and collaborator? How do we judge these women who both suffered and inflicted intense pain? Moaveni takes us into the school hallways of London, kitchen tables in Germany, the coffee shops in Tunis, the caliphate’s OB/GYN and its ‘Guest House for Young Widows’ — where wives of the fallen waited to be remarried — to demonstrate that the problem called terrorism is a far more complex, political, and deeply relatable one than we generally admit.

Azadeh Moaveni is a journalist, writer, and academic who has been covering the Middle East for two decades. She started reporting in Egypt in 1999, while on a Fulbright fellowship to the American University in Cairo. For the next several years she reported from throughout the region as Middle East correspondent for Time magazine, based in Tehran, but covering Lebanon, Syria, Egypt and Iraq. She is the author of Lipstick Jihad, Honeymoon in Tehran, and co-author, with Nobel Peace Laureate Shirin Ebadi, of Iran Awakening. In November 2015, she published a front-page piece in The New York Times on ISIS women defectors that was finalist for a Pulitzer Prize. Her writing appears in the Guardian, the New York Times, and the London Review of Books. She teaches journalism at NYU in London, is a former fellow of the New America Foundation, and is now senior gender analyst at the International Crisis Group.

Tags: Among the Women of ISIS, Azadeh Moaveni, Guest House for Young Widows