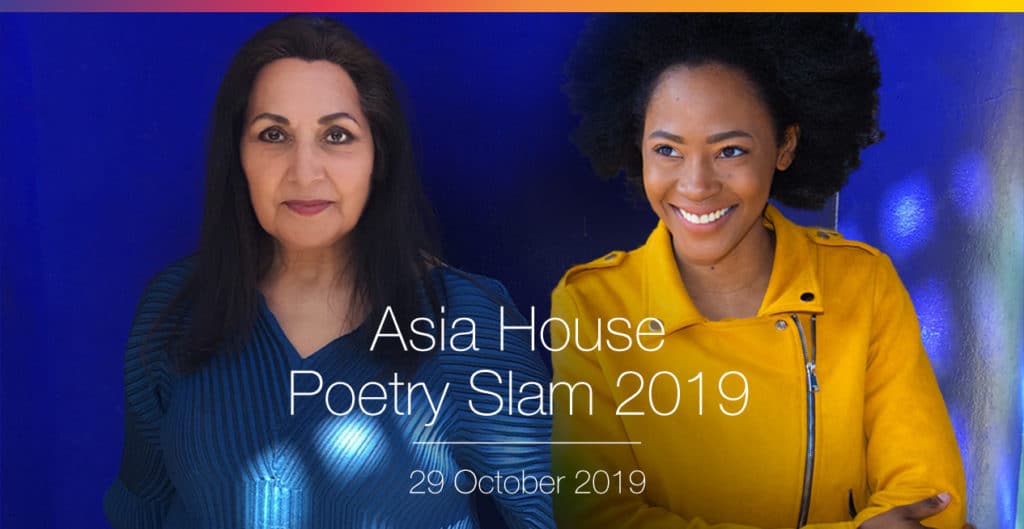 Join us for an evening of outstanding spoken word where eight shortlisted young poets will perform – and one will be crowned the Asia House Poetry Slam 2019 winner.

The final eight will be aspiring poets and spoken word artists aged 18 –25, performing poetry that examines some aspect of Asia or the Asian diaspora.

Our judges for the evening will be poet and artist Imtiaz Dharker and third Young People’s Laureate for London Theresa Lola; who will also be performing their own poetry. The evening will be MCed by poet and radio presenter Mr Gee.

If you are an aspiring young poet and would like to enter the slam, please find more details HERE.

About the Judges and the MC

Imtiaz Dharker is a poet and artist, awarded the Queen’s Gold Medal for Poetry 2014. A Fellow of the Royal Society of Literature, she has been Poet in Residence at Cambridge University Library and worked on several projects across art forms in Leeds, Newcastle and Hull, as well as the Archives of St Paul’s Cathedral. Her six collections include Over the Moonand the latest, Luck is the Hook, and her poems have been broadcast widely on BBC Radio 3 and 4 as well as the BBC World Service. She also scripts and directs video films, and has had eleven solo exhibitions of drawings.

Theresa Lola is a British Nigerian poet and facilitator, and is the current Young People’s Laureate for London. She is an alumni of the Barbican Young Poets programme, and was joint winner of the 2018 Brunel International African Poetry Prize. In April 2018 she was commissioned by the Mayor of London’s Office to write a poem for the unveiling of Millicent Fawcett’s statue in Parliament Square, which she read at the ceremony. She has facilitated poetry workshops at St Mary’s University, as well as primary and secondary schools. Her debut poetry collection In Search of Equilibrium (Nine Arches Press, Feb 2019) is described as ‘a glorious hymn to being alive and wounded’.

Mr Gee is a Poet & Radio presenter. Famed as the “Poet Laureate” of Russell Brand’s Radio Show, Mr Gee has presented the series “Rhyme & Reason” and “Bespoken Word” for Radio 4. He was a featured guest on BBC 2’s “Poetry Between the Lines” and this year he was one of the hosts for the Commonwealth Heads of Government Forums.