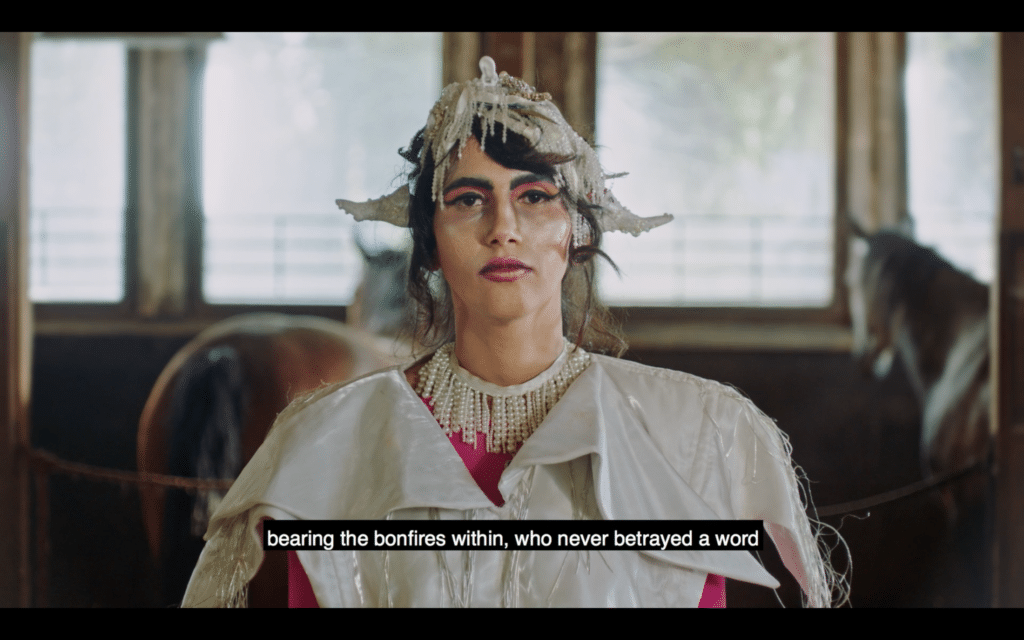 Pathway: Whoo am I 我是水 by Songkun Wan – On the edge of uncertainty, may I fly? by Mia Cabalfin – Spell by Sam Reynolds – Journey to the CharBagh by Abdullah Qureshi.

In the wake of the pandemic, our fluttering bodies have been constantly required to adjust and adapt in waves of displacement and loss, while experiencing ongoing processes of grief and change. How might we again embrace ourselves and each other, in this strange liminal space?

The body breathes the liveness of the singular moment, while paying tribute to the crossing of thresholds.

The body ventriloquises our fevered dreams and metabolises our longing for new stories and old truths – in choreographing the new imaginaries for a future we co-create and inhabit.

Mia Cabalfin is a Manila-based dance artist and choreographer. She began her formal dance life quite late—starting in college at the Ateneo de Manila University with the Company of Ateneo Dancers (CADS), where she became president in 2003. During her senior year, she was awarded the Dean’s Award for the Arts in Dance. After university, Mia continued her training as a hiphop dancer, and trained to be part of the first Hiphop International team to represent the Philippines. Later on, she decided to take formal dance lessons at Steps Dance Studio under the tutelage of James and Liesl Laforteza and Julie Alagde. However, a work opportunity came up from ABS-CBN Broadcasting Network, a major television network in the Philippines – and she stopped dance to pursue a thirteen year-career in broadcast media where she honed her skills as TV presenter, writer, and producer. It was also during this time where she found the contemporary dance company Airdance, and auditioned for a scholarship. She was then able to enter the company as a scholar, then eventually became company member and choreographer. Her time with Airdance was from 2006-2017; where she taught, performed, and choreographed. In 2008, she was selected for the Danceweb Scholarship Programme in Vienna, Austria as part of the Impulstanz Festival – her notable teachers were DD Dorvillier and Trajal Harrell, Susanne Linke, David Zambrano, Marjory Smarth, and Frey Faust. In 2012, she formed a choreographic duo with co-Airdance member Rhosam Prudenciado Jr., and completed an Artist-in-Residence Program in Kyoto Arts Center, Japan – featuring their first full length site-specific piece entitled “Housewarming”, which was also a collaboration with Kyoto-based musicians Marihiko Hara and Polar M. Succeeding years would find Mia continuing to collaborate with Rhosam in this duo – performing their pieces in several venues and festivals both locally and internationally. In 2019, the duo was selected for the Youkobo Arts Space Artist-in-Residence (Tokyo) program, followed by their acceptance in Tokyo Arts and Space Research Residency program in 2020. During these residencies, they developed their piece “Pahayag (Expression)” which focuses on the correlation of population statistics to the culture of expressiveness. Due to the Covid-19 pandemic, Mia had to extend her stay – thus she created her solo online performance experiment entitled “109日 (109 days)”, which was performed and livestreamed from Tokyo. This was an online collaboration with Manila-based tech company OTT, as well as Japanese artists Aiichiro Miyagawa, Tadanobu Asano, Marihiko Hara, Polar M, Haruka Bird, DJ Hiroking and Hong-Kong based musician J-hoon. Aside from her work as an independent contemporary dance artist, Mia is also founder/director of Hiphop Hooray, a dance workshop for kids and teens. She is also training director and instructor at Saddle Row, and core instructor for Physique 57 Manila. Her main focus now is building multimedia solo repertoire, and she has a renewed passion for learning house dance.

Annie Jael Kwan is an independent curator and researcher based in London, and who works between the UK, Europe, and Asia. She founded the curatorial initiative, Something Human, in 2012, to focus on the critical ideas surrounding movement across borders. Something Human has delivered projects in the UK, Rome, Venice, Belgrade, Skopje, Lisbon, and in Singapore. In 2017 Something Human launched the pioneering Southeast Asia Performance Collection (SAPC) at the Live Art Development Agency in London, with over 27000 digital items that represent 50 artists from the region, during its M.A.P.(Movement x Archive x Performance) project. M.A.P. extended across multiple sites in London and Venice, including a programme of live performance in collaboration with Diaspora Pavilion and the International Curators Forum in Venice. In 2018, she co-founded Asia-Art-Activism (AAA), a research network that has presented an active public programme of presentations, talks, workshops, mini-residences and festivals that challenge and complicate notions of ‘Asia’. She curated “Being Present” a live performance programme in response to the exhibition Speech Acts: Reflection-Imagination-Repetition at the Manchester Art Gallery; and the subsequent digital adaptation for the Paul Mellon Centre’s British Art Studies Issue 13. AAA is in residence at Raven Row until May 2021, and leads Tools to Transform, a project focused on creating resources for Asian and diaspora organising that received the European Cultural Foundation’s Culture of Solidarity grant in 2020. As a researcher, she co-edited Southeast of Now: Directions in Contemporary and Modern Art in Asia’s guest issue: Archive, and contributes to various publications including On the future and artist-run spaces, Tate website, Art Review Asia, and Art Asia Pacific.

Abdullah Qureshi is a Pakistani born artist, educator, and cultural producer. Within his practice, he is interested in using painting and collaborative methodologies to address personal histories, traumatic pasts, and childhood memories. Through his on-going doctoral project, entitled Mythological Migrations: Imagining Queer Muslim Utopias, he examines formations of queer identity and resistance in Muslim migratory contexts. Qureshi’s work has been exhibited internationally, including at the National Gallery of Art, Islamabad; Alhamra Art Gallery, Lahore; Rossi & Rossi, London; Uqbar, Berlin; Twelve Gates Arts, Philadelphia; and SOMArts Cultural Center, San Francisco. He has held numerous positions at cultural and educational institutions including British Council and the National College of Arts, Lahore, and conducted lectures, paper readings, and artist talks around the world, including at the Film and TV School of the Academy of Performing Arts (FAMU), Prague; Ateneum Art Museum, Helsinki; PRAKSIS, Norway; NARS Foundation residency program and Residency Unlimited in New York, University of California, Irvine; Valand Academy, Gothenburg; Manchester Museum; and Fábrica de Arte Cubano, Havana. In 2017, Qureshi received the Art and International Cooperation fellowship at Zurich University of the Arts, and in 2018, a research fellowship at the Center for Arts, Design, and Social Research, Boston. In 2019, he joined the Center for Feminist Research, York University, Toronto as a visiting researcher, and is currently a Doctoral Candidate, supported by Kone Foundation, at Aalto University in Finland.

Sam Reynolds is a Filipinx-British-Irish live artist, alternative cabaret performer, host and producer based in London.Using humour, pop culture, and popular forms such as contemporary dance, physical comedy, striptease, and the queer performance tradition of lip-syncing, he creates accessible and theatrical social commentary exploring themes such as race, queerness, identity, and vulnerability. Sam won Striptease Artist of the Year at the 21st Sexual Freedom Awards, was Nominated by Mark Whitelaw for the Arts Foundation Fellowship at the 25th Arts Foundation Anniversary Awards, and has performed across the UK with both Duckie and Carnesky. He closed the Cabaret Arena on the Saturday night at Latitude Festival closing Duckie’s headline show, performed in Duckie’s Twenty First Century Music Hall at The Citadel in St Helens on Duckie’s twentieth anniversary weekend, and was the special guest artist performing at the Grand Opening of Carnesky’s CFS Soho. He made his international show debut in The Miss Behave Gameshow at Darwin Festival in Australia after performing in the show at Underbelly Festival’s Spiegeltent at the Southbank Centre, and he produced the London tour of Nights at the Circus, a theatre collaboration between disabled and non-disabled artists exploring sex, desire and violence, presented by director Fauve Alice and Spare Tyre.

Sam Reynolds was awarded funding from Arts Council England and the British Council’s Artists’ International Development Fund, and worked with Pineapple Lab in Makati, Metro Manila, Philippines, where he became an Artist-in-Residence, performed throughout Fringe Manila 2018, and lead queer performance workshops called the (T)werkshops with local queer artists, culminating in a showcase at Dulo MNL. He then co-produced the first ‘Cabaret’ performance night at weekly queer techno party Elephant at XX XX, which was also his Manila despedida event. Sam was one of two participating artists alongside Bettina Fung in the 2019 edition of Howl Yuan’s Artists Home Swap, where he brought his (T)werkshops to Taipei, again working with local queer artists, with the showcase at 酸屋 | Acid House. Sam and Bettina then presented work and led workshops at 駁二藝術特區 | Pier-2 Art Center in Koahsiung. He has worked with Nicholas Tee on Tee’s London-based Asian club night Diaspora Disco, as well as with UK-based Asian cabaret collective The Bitten Peach. While a Resident Artist at the Roundhouse and founding and running Cushion Collective, the venue’s resident cabaret and performance art collective, he formed the Cushion Eurasian Society with sole fellow Eurasian member Jasmine Shigemura Lee.