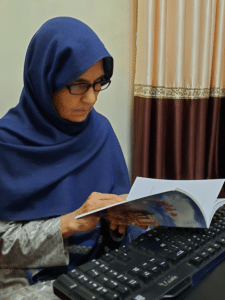 Sharifa Pasun lives with her husband and children in Kabul. She works as a scriptwriter on Afghanistan’s long-running radio soap opera New Home, New Life. She started reading and writing fiction at university.

Her story ‘The Decision’, developed with the Untold – Write Afghanistan programme, is published in English, in Words Without Borders, this month. “It’s hard for women to get published in Afghanistan. There are obstacles from society, and no support on offer”.

Bagri Foundation is proud to present, Sharifa Pasun, our ninth writer featured as part of the project ‘Untold: Write Afghanistan’ supported by The British Council and Bagri Foundation.  Fatima shares with us an excerpt of her story, ‘The Decision‘ alongside a  video which features some of her selected images and her reflections on what it means for her to be a writer, her process, and her inspiration.

Sharifa is Pashtun and writes in Pashto. For this video, she was asked to speak in Dari for ease of translation.

Sharifa says of her story:

‘The Decision’ is the story of a day in the life of a young Afghan woman. She is a university student, but also works as a newsreader at Afghanistan’s national radio and TV station. Set in 1985, the story explores how both parts of her life are affected by the country’s ongoing conflict.

You can read her full story on the Words Without Borders website here.

Sanga reached the National Radio and TV headquarters, where she worked in the evenings. During the day, she was a student at Kabul University.

She went straight to the makeup room on the left side of the building, at the end of the corridor on the first floor. The makeup lady, Maryam, was in the room. She was tall, with curly hair she had dyed brown. Her glasses were pushed to the top of her head and their string hung down behind her neck. She was standing at the middle mirror, busy removing curlers from another newsreader’s hair.

Sanga stood in front of the sink and washed her face with warm water, then, looking in the mirror, dried it with a paper napkin. Maryam asked the seven o’clock newsreader, whose hair she was doing: ‘Should I do your makeup or do you want to put it on yourself?’

She answered: ‘You will be busy with Sanga’s hair now, there isn’t much time left, I will do my own makeup’.

Sanga sat down beside the seven o’clock newsreader and Maryam stood over her. She touched Sanga’s soft hair, looked at her clothes, and said: ‘It is good you are wearing modest clothes’.

Sanga didn’t like this comment. She wanted to say that she always wore suitable and modest clothes. At this moment, they heard a loud explosion from a nearby rocket. They all got very scared and their eyes opened wide in shock. The seven o’clock newsreader could barely speak. She whispered: ‘Sounds like it landed very close’.

Maryam, the makeup lady, said: ‘God save us, I hope it is not a continuous attack’.

Sanga looked at Maryam and said: ‘If you finish my makeup and hair quickly you will be able to go home soon. I will be here until eight thirty or nine o’clock’.

It was 1985. The opposition was busy fighting the Afghan army, firing rockets and targeting government buildings and institutions. People used to call them blind rockets because only one in a hundred would hit the target.

Sanga’s heart was beating hard and fast. She hadn’t kissed her two-year-old son goodbye, because when she did, Ghamai would cry and insist on going with her. She couldn’t take him to work, so she usually left the house without letting him know.

Maryam said angrily: ‘What kind of country is this? They can’t let us live peacefully – how can we work and live in this kind of situation?’

It was twenty past six in the evening now. The telephone rang; it was a telephone on a wire, as they all were in offices at that time. Maryam picked up and, after listening, told the seven o’clock news reader to go to the newsroom. She said: ‘They say the news is very important and there is a lot of it. You need to go now’.

Then, too, radio and TV were important institutions. This newsroom produced news about the leader, his cabinet ministers, and their work, as well as the victories of the army, which was fighting the opposition. At the end of the broadcast, there was some international news too. At that time, there was only one TV channel across the county that broadcast live news in Kabul city.

The newsreader quickly took her pen out of her handbag, looked at herself in the mirror again, put on another layer of red lip liner, and left in a hurry. As she closed the door, another rocket struck. The makeup lady was panicking: ‘This is definitely a continuous attack; more rockets will land’.

Sanga was worried that Maryam might leave without finishing her makeup. The female newsreaders would always have their hair and makeup done before appearing on TV. Maryam took the metal comb, separated Sanga’s hair in small parts, and curled them all up. She plugged in the hair-drying hood while Sanga sat calmly underneath it, the warm breeze blowing through her hair.

The seven o’clock newsreader opened the door of the makeup room and came in to take her handbag. She had finished her work and a car was waiting to take her home. Maryam quickly said: ‘I want to go with you.  We live in the same direction’.

Translated from the Pashto by Zarghuna Kargar.