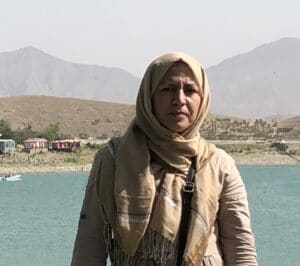 Masoma Kowsary lives in Kabul. She has a Master’s degree in engineering, but is not currently working because she is a carer for her mother who has Alzheimer’s. She has had stories published in local magazines, but her work has never been translated. ‘The most important thing is for me to keep writing. There is a literary community in Kabul, but it’s mostly poets and mostly men. I am not part of that’.

Bagri Foundation is proud to present, Masoma Kowsary, our seventh writer featured as part of the project ‘Untold: Write Afghanistan’ supported by The British Council and Bagri Foundation.  Masoma shares with us an excerpt of her story, ‘An Imprint on the Wall ‘ alongside a video which features some of her selected images and her reflections on what it means for her to be a writer, her process, and her inspiration.

Masoma on her story: With this story, ‘An Imprint on the Wall’, I have tried to draw a true picture of Afghanistan. We have a sad past, and don’t yet have a good present, and I don’t believe there is a promising future ahead. In my writing, I hope to show the truth of our country – for the readers of today and the future.

An Imprint on the Wall

Ranna was standing behind the two concrete barrier walls when the explosion took place – the one that had thrown everything up into the sky. On the way back down to earth, half her body had come to rest between the two walls. They ran parallel, no more than a metre apart, and that is where she’d returned. Or half of her, at least – the other half never came back down from the sky. Maybe it did, and had been collected by the ambulance, or the water of the Kabul River had drowned it. But the half that did come back down lay still between the walls.

Her face was covered in blood, and her eyes had been turned red by it – or maybe by staring at the blood all around. From where Ranna’s eyes were looking, one of the walls seemed as if it had been covered in a great red veil. As the blood ran, and dried, and paused, it made lines in that great veil. And though Ranna’s eyes were still, it seemed that the lines were moving – that, unlike Ranna, the lines were alive.

The lines formed a shape – an imprint of a short, fat man. This man was the Manager. If he had seen Ranna absent from work, he’d have docked her pay. Her co-workers used to say: ‘The Manager has no education, and resents it, and that’s why he treats everyone so terribly. His wife is a relative of the company President’s wife, and when the new President was appointed, he asked the Manager to join him’.

Ranna pictured the face of the President in the lines on the wall. A shaved face, and no turban atop it. But if the lines would run to form a long beard from his stubble, and if others would make a turban on his head, he would look just like her father. She had seen photos of her father from years ago. The men in the pictures had long dress shirts and their trousers were rolled up. With their turbans and well-cut beards, they stood leaning against their Kalashnikovs, or with a rocket resting on their shoulder. In the middle of the rocks and trees, they stood smiling.

When she had first seen those photos, her mother had explained them to her: ‘When you turned four, there was a revolution. Your father smuggled us inside Iran, and then he returned back to the country for Jihad’. He had sent a few photos in his first year back in Afghanistan, her mother said. But mostly they heard about him through rumours. Sometimes, people brought the news that he had become a Mujahid; other times, he had remarried with another woman and had children with her. A few years later, no one brought any news from him.

She stopped thinking about her father, because there were voices coming from the walls: Officials, who worked for the Manager, were introducing her colleague Amir. The Officials were all a little slimmer and taller than the Manager, and Amir was slimmer and taller still. The lines on the wall moved accordingly. Ranna’s colleagues used to say: ‘When the Manager first came, he seemed tall. But after a few years he became fatter. Then he bought a car, married for good, sent his parents to pilgrimage to Hajj, and two of his brothers abroad too’. A short, fat imprint on the wall.

Another voice joined the echoes between the two walls: Takbeer, who had been absent for three days. The Manager had reduced his pay. And then another echo – the sound of the explosion that had silenced them. And then the voice of her father: My wife could not give me a son, so I re-married for a second time. I just could not leave my heritage to my daughter. And then the sound of the ambulance that had arrived to wash the streets.

-Translated from the Dari by Parwana Fayyaz.