The Bagri Foundation is very excited to bring the incredible Susie Ibarra to the UK for her first solo headlining performance at Café OTO on 7 November in a night of exploration and improvisation. She will be on the same bill as Arizona-based band Sunn Trio, who will perform an improvised jazz and desert-rock set and Japanese one-band man extraordinaire ICHI. Book your tickets for the concert here: http://bit.ly/cuttingedge711

Susie is widely acclaimed in the US for her avant-garde and experimental percussion in the jazz, world, and contemporary music scenes and known as a sound artist, often crossing into contemporary museum and gallery spaces.

Modern Drummer Magazine calls her sound “a sound like no other’s, incorporating the unique percussion and musical approach of her Filipino heritage with her flowing jazz drumset style” whilst the New York Times called her compositions a “calling up [of] the movements of the human body; elsewhere it’s a landscape vanishing in the last light, or the path a waterway might trace”.

A natural collaborator, Susie leads the DreamTime Ensemble, whose 2017 album Perception, is a suite of music exploring memory and shifting sensory experiences. She also performs with collaborative ensembles Mephista, Yunohana Variations, and LIMBS and recently composed a piece that was presented at Asia Society, New York entitled Fragility: An Exploration of Polyrhythms with dancer and choreographer Souleymane Badolo and members of the DreamTime Ensemble.

It is this piece that feeds into Susie’s performance at Café OTO next week. She will perform a set of pieces built around rhythmic cycles; a type of meditation which will weave through tempos, melodies, textures and phrases that move through various rhythms and polyrhythms. Chelsea Pettitt from the Bagri Foundation asked Susie a few questions about her work ahead of the concert.

CP: You have had such a wide-ranging career from field recording to jazz trios and collaborative ensembles to solo experimentation! Can you talk a little about how you started out in percussion and what drew you to the artform? As well as when you started to work with field recordings?

My first instrument was piano as a child.  I studied classical music and sang in choirs in school and church. I came from a Filipino American family household. My parents loved music and we all played instruments and sang.  We would also host with the community in Houston, Filipino choirs that would tour in the US. I  started playing drumset in high school and was invited to play in a punk rock band.  I had a high school rule from my parents that I could not play any shows on a school night.  It was a lot of fun, drums at shows on Saturday nights and piano and organ at church on Sundays – a real contrast. I really ended up loving all kinds of drums and percussion.  My first recording I bought was Michael Jackson Off the Wall. The beats were just great and so danceable. MJ was so rhythmical and so musical.  One of the first Jazz recordings I heard was Thelonius Monk,  Monks Dream, on the radio in Houston TX.  My parents had earlier big band and vocalist records but this was different to me.  It drew me in. I started playing Philippine kulintang and gong-chime music from Southeast Asia as a teenager too.   I think all of these musical aesthetics have influenced my musical growth.

I have always loved field recordings and the possibility to create an atmosphere and environment through sound. Ever since I was composing and recording music I enjoyed placing in field recordings to support live performance. I started recording more specifically traditional artists in the Philippines from around 2004—2014.  I worked and researched with 7 Indigenous tribes and youth choirs.  My work started to evolve in the last decade where I found myself entering a practice of field recording and composing sound installations that are both fixed and mobile.

CP: Your collaborations and compositions are far reaching and complex. Can you talk a little about how you approached Fragility, bringing on board a dancer and choreographer and the entire Dreamtime Ensemble? It sounded like a fascinating piece that included chance and improvisation, something similar to your album with YoshimiO and Robert Aiki Aubrey Lowe.

Fragility is an immersive game piece which utilizes polyrhythms as a model for human interdependence. It is an exploration through music the subtle intersections that affect relationships.  My band, DreamTime Ensemble performs the music and choreographer Souleymane Badolo has danced to my sounds triggered by Xbox Kinect Motion Capture.  I conduct some of the pieces in a surround sound setting, and for a few of the pieces I invite the audience to conduct the ensemble.  For the next rendition , I will be developing these pieces into etudes, Fragility Etudes to perform and premiere at the Asia Society Triennial in NYC 2020.  In the New York Historical Society Museum and Library we will perform these etudes in the Reading Room and invite the audience to conduct and play these music game studies of polyrhythms.

CP: Susie, you state that you are “a contemporary artist” but very “much influenced by traditional music as well”.  You mention your Filipino heritage feeding into your love of music. How else does this tradition influence the way you make music?

Oh, I love to listen and am influenced by many different types of music, traditional and contemporary. As a percussionist I’ve studied traditional techniques. I studied and play traditional Southern Philippine Maguindanaon Kulintang music.  I really enjoy playing the traditional pieces, its reminds me of my teachers and so many loved ones. These traditional styles and others as well as collaborations with traditional artists seems to always speak to me. I feel like the past is so important in our understanding of how to step forward into the future, more than we could possibly be aware of.

CP: Some of your live performances are meditative and mellow, occasionally utilising empty sound as much as percussive sound – setting a kind of vibe and energy in the venue. What kind of personal experience are you going through when performing? Are there other influences such as yoga and meditation or spatial arrangements that you draw upon?

Hmm. That’s interesting.  I think the meditation is in the sound and in the music. When I perform I am bringing myself to the stage to be a vessel for the music to move through.  I have had some moments on stage where I feel like I am sitting on the side watching and listening to myself perform.  I have had other moments where it feels so physical the music and sound moving through my body and I feel very present in each note that is played.  The audience in the room and the environment influence how I will begin and continue to make music on stage.

CP: Can you tell us a little about what you will be performing for us on 7 November and what you hope your audience experiences when listening to the set?

November 7th I’ll be performing a set of music Rhythm Cycles.  This is a sonic of meditation on rhythmic cycles in which I will be weaving and shifting from one rhythmic cycle to another , sometimes in a long held tones and cycling textures to quick cut phrases and grooves.

CP: We hope to see more of you in the UK, especially your larger-scale collaborations and new music. What is next for you?

Thank you!  I would love that!   I am touring this solo concert, to you in London and then in Indianapolis PASIC Percussive Arts Society and at the Graduate School of Design Harvard.  I will be looking to record a solo record in the near future after the concerts.  On long term projects, I am continuing to work on Water Rhythms: Himalayan Glacier Soundscapes where I’m recording glacier run off in the Himalayas in India and Sikkim.  In collaboration with glaciologist and geomorphologist Michele Koppes we’re creating a sonic installation of the Glaciers and the tributaries along the Ganges.  I will also be creating instruments out of material –stones and metals- from this area for performance.

Thank you so much for taking the time to speak with us and we look forward to seeing you live on 7 Nov!

Thank you Chelsea! I’m looking forward to it! 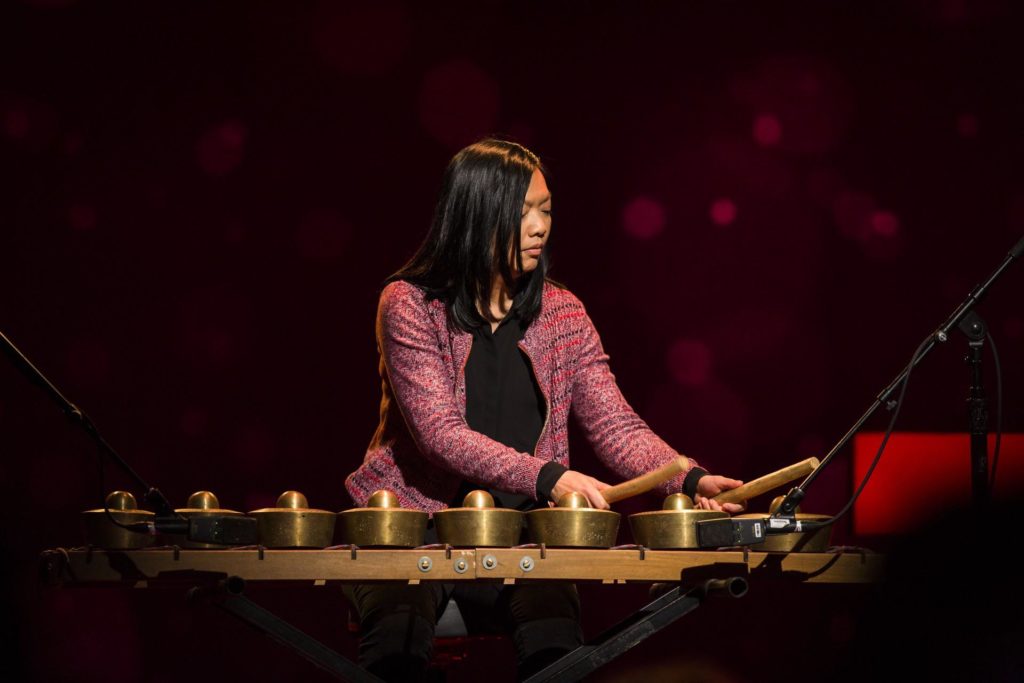