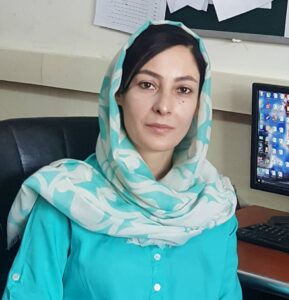 Helay Najmee lives in Kabul with her family. She has worked as a writer for theatre, radio and comics. She is currently a script-writer on the Afghan radio soap opera, New Home, New Life. She likes reading symbolic writing – Dostoevsky, Gabriel Garcia Marquez, Kafka. She wants her stories translated widely. “I love the editing process the best – it is like shedding light onto something.”

Bagri Foundation is proud to present, Helay Najmee, the first writer featured as part of the project ‘Untold: Write Afghanistan’ supported by The British Council and Bagri Foundation.  Helay shares with us an excerpt of her story, “Falling from the Summit of Dreams” alongside a  video which features some of her selected images and her reflections on what it means for her to be a writer, her process, and her inspiration.

Helay on her story: This is an excerpt from the middle of my story, ‘Falling from the Summit of Dreams’. In the story, I want to explore violence against women in Afghanistan and how important it is for my character, Zahra, to dream and imagine a different life.

Falling from the Summit of Dreams

With her sparkling, hopeful eyes, she looked at the knot in the corner of her scarf, as if it were the key to her good fortune.

Just a few more days of knotting this corner shall bring me enough money for a ruby ring.

She held her pale hand, covered in cuts from gardening, close to her eyes. She imagined the beauty of a ruby ring on her finger. Staring at the purity of the ring, she left the world of reality and entered her imaginary place, where only a queen could live.

There, she was Zahra in her green velvet dress, with uncountable pleats, sewn by the women of her village. Her hands were soft, young, and on her finger she had a gold-plated ruby ring. She braced herself to look down, fearing she might have entered this imagined world wearing those worn-out plastic shoes. She worried she would be mocked for them, but was relieved to find that she had on beautiful golden slippers that no one in the village had seen before. She breathed deeply and, in that moment, felt at peace.

Zahra was now walking around freely, showing her beauty to all who were watching her. She made other women envious.

But then a stone hit her and forcefully returned her from that world. She looked around and saw her stepson, who was laughing mischievously and saying, ‘Crazy woman, you are daydreaming again, talking to yourself’. Irritated, Zahra sent him away. But the boy didn’t go far, and kept coming back saying he was going to tell his father about her daydreaming.

Zahra didn’t dare dream again. With an uncomfortable feeling but with unbreakable conviction, and even though her legs were tired, she continued walking, quickly.

With a great deal of struggle, she finally reached the ruined castle, the one that she dreamt was her palace. She opened the walnut-wood gate and entered. It was fortunate, she thought, that no one was inside. It was the afternoon, and the sun was burning bright, and people would normally be resting indoors.

Zahra walked towards a pile of straw. The castle’s roof had collapsed, and no one would think of making their way into the mulch. She started searching for the bag of almonds that she had hidden amidst it. She found the bag, relaxed, and opened the knot in the corner of her chador. Inside were the paper-soft-shell almonds that only her bad-tempered husband was allowed to eat during the winter.

She poured the almonds from her chador into the bag. With both hands, she lifted it up and felt its weight. She could feel her dreams getting closer to coming true. She pushed it back under the pile of straw.

Then a sudden thought came to her and made her feel uneasy: she wondered if there was a hole in the bag. She put her hand in to check. Reassured, she pushed the bag back into the straw and walked back to the house.

– This excerpt was translated from the Dari by Parwana Fayyaz.