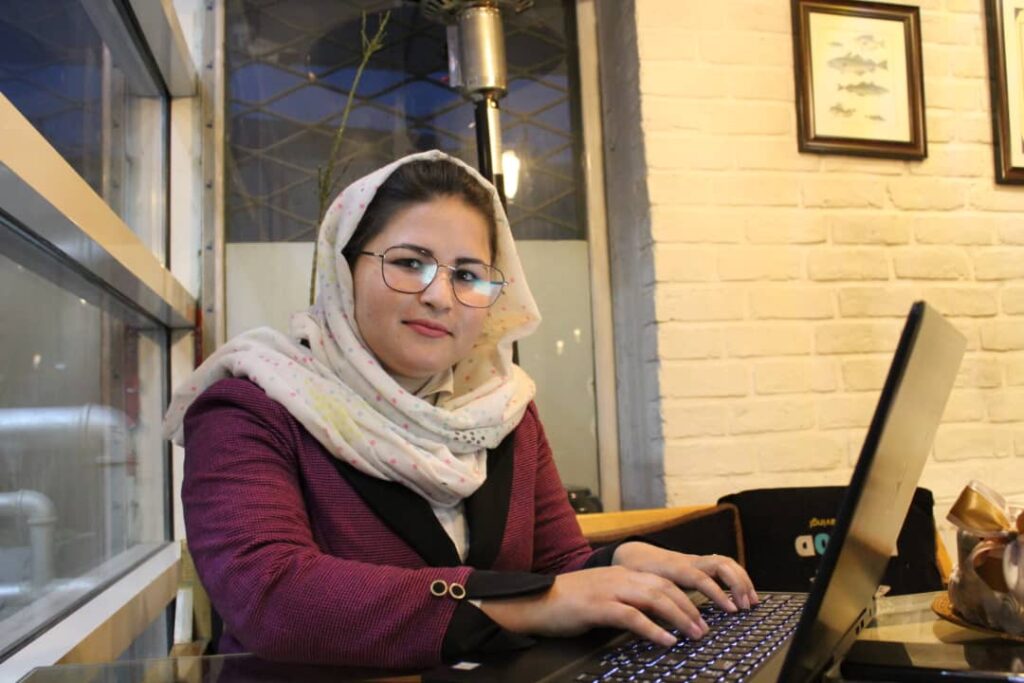 Freshta Ghani, from Kunar Province, began writing under a pen name when she was at school. Recently, she and her husband fled Afghanistan for Tajikistan, when the Taliban threatened the radio station where she worked. Her story ‘Daughter Number Eight’, developed with the Untold–Write Afghanistan programme, will be published in English in Words Without Borders in December 2020. “Everyone thinks their writing is amazing, but they need someone to tell them otherwise!”

Bagri Foundation is proud to present a profile about Freshta Ghani, the second writer as part of the project  ‘Untold: Write Afghanistan’ supported by The British Council and Bagri Foundation. Freshta shares with us an excerpt of her story ‘Smoke’, alongside a  video which features some of her selected images and her reflections on what it means for her to be a writer, her process, and her inspiration.

‘Write Afghanistan’ is a project created by Untold, a development programme for writers in areas of conflict and post-conflict, that offers support to women writers and works remotely with them to develop and promote their stories which often remain hidden.

Freshta on her story: ‘Smoke’ tells the painful story of one Afghan family in Nangarhar province. It is based on a true incident, in which hundreds of families fell victim to NATO overnight operations, in an  attack that was later reported as a mistake. I want to say how we are tired of war – when the commander of the NATO forces apologises, no one is brought back to life. This excerpt is the beginning of my story.

The grandmother was old, hungry and uncomfortable. Hearing her stomach’s noises, her body feeling sore, she shouted loudly to her granddaughter: ‘For God’s sake, what are you cooking? Potato or meat? The potato still isn’t ready? I can hear mice running in my stomach’.

There was no answer. She slowly slid from her seat and looked out of the window. She couldn’t see anyone; she was furious and starving. With a great deal of hassle, she stood up, her flesh moving like a wave from a stone thrown in water. The grandmother had not yet reached the door when her other grandchild brought water for her. She sat at the end of the room, washed her hands, and dried them with a small towel. She leant on a pillow.

They brought the meal – potato with tomato sauce and bread. Her sons, two daughters-in-law, and two grandchildren sat around the food, which was placed on a clean dastarkhwan in the middle of the room.

The grandmother observed each family member, and then spoke to her son: ‘Juma Gul – where is Najib?’

Juma Gul replied, ‘Adi, Najib went to Kabul this morning. He said he wants to get a government job’.

She stared anxiously at Juma Gul. ‘Why does he want to get a job in Kabul?’ she asked. ‘What is wrong with Jalal-Abad? No one is throwing stones at him here’.

Juma Gul swallowed his food and replied to his mother: ‘Adi! Najib has gone to Kabul for the interview; the job is in Jalal-Abad. In the afternoon, he called me to say it was too late to come home, so he will leave Kabul tomorrow’.

‘What has an interview to do with the job?’ she replied. ‘What are you talking about? I don’t understand what these young people are up to nowadays. May Allah protect us’.

Juma Gul sighed. The grandmother tore off another piece of warm, freshly baked bread and dipped it into the sauce.

It was as she was putting that hunk in her mouth that the explosion happened. The sound was ear-splitting. The roof came down on the plates and bowls. The wooden windows caught fire, and the room filled with dust, smoke, and flames. The chaos started; the streams of blood. The animals in the yard were shouting, and women and children were running to hide in their basements. You could smell the burnt flesh and the human bones, and the explosives. You could hear a heartbeat under the debris. You could see a hand asking for help. Maybe someone was suffocating under the soil and bricks, but no one could help.

It was a night operation. No one was allowed to go out of their house; no one in the village knew what was going to happen. Slowly, everything calmed, and the grey smoke and the dust disappeared from the sky. No one slept that night.

The morning light emerged, and the sun appeared from behind the mountains. The villagers came out of their homes. Everyone was asking the same question: Whose house was targeted?

– This excerpt was translated from the Pashto by Negeen Kargar.