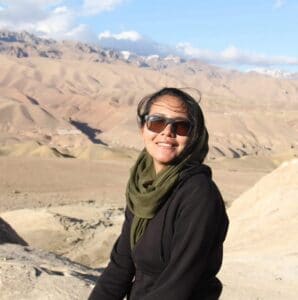 Fatima Saadat lives and works in Kabul. At school, she wrote stories in Dari, but went on to study English and now she prefers writing in English. The landscape of her home province of Bamyan inspires her writing. “If I go abroad, I feel I’ll lose my inspiration, and will start writing about tired things. Bamyan makes me want to write.”

Bagri Foundation is proud to present, Fatima Saadat, our fourth writer featured as part of the project ‘Untold: Write Afghanistan’ supported by The British Council and Bagri Foundation.  Fatima shares with us an excerpt of her story, ‘Bangi‘ alongside a  video which features some of her selected images and her reflections on what it means for her to be a writer, her process, and her inspiration.

Fatima on her story: I wanted to write a short story about what I see, hear and feel every day. In our society, people often make judgments about girls like Fahima, and also the Bangi, who has been cast out from society. I want readers to understand both characters, but not to judge them. In this excerpt, Fahima has her first proper encounter with the Bangi.

She entered the alley and saw no one. Not a single man to threaten her peace. She breathed in, then ran fast in the hope of passing the gap quickly. But as she raised her head, she saw Bangi coming out of the opening, doing something with his hands and pants. His clothes were grey and dirty, and his skin dark and burnt by the sun. He had bald patches on his head.

Bangi, the addict, was known throughout the neighbourhood, and was sometimes mistaken for Crazy Kaka, who lived in the same area, and who would pull his pants down whenever he saw a girl alone in an empty alley. Bangi and Crazy Kaka were treated the same.

Fahima was sweating now, and praying in her heart. She kept her head down to avoid seeing his genitals, holding her schoolbooks tightly.

When she reached the old man, she slapped him with her books so hard that he was thrown to the ground. She stood there, gazing at him and feeling brave, until he ran off.

Fahima opened her eyes and, glancing to the side, saw Bangi standing a few metres away. As much as she repeated this scene over and over in her head, she never dared to do anything for real. She felt his presence through the corner of her eyes, and through her irritated skin.

‘Excuse me, girl? Hello? Can I ask you something? Hello?’ he shouted, as Fahima passed him and quickened her pace towards the end of the alley.

She took a deep breath, relaxed for a moment, then turned and saw Bangi following her. She ran until she reached the square, where she felt reassured by a crowd of people waiting for taxis.

‘Charrahi Shahid?’ she asked a taxi driver who was standing beside his car.

She sat in the back beside two other women who were evidently in a rush. They shouted to the driver to get going. There was a man, too, sitting in the front seat, wearing a mask, a black suit, a silver satin tie, and smelling of sweet perfume.

‘Charahi Shahid, Charahi Shahid’, shouted the driver at the crowd. The front door opened suddenly and Bangi forced himself in beside the suited man.

‘Get out!’ the driver shouted.

The driver, seemingly convinced, got in and started the car.