A conversation with Meera Krishnamurthy

Bagri Foundation: What is it that drew you to Tarot cards as a starting point for Change/ce? Why did you decide to focus on the three specific ones we can see in your work?

The on and off lockdown in Bengaluru from April 2020, and the increase in the number of coronavirus cases in India, saw us largely sitting at home. My family and I were spending more time indoors and this meant more board games and card games. The Rider-Waite tarot cards are a precursor to the playing cards that we use today, so we purchased the original to make our average rummy gin game a bit more complicated and fun. In addition, we took turns to read it- from how to get out of what seemed like a Covid-induced limbo to the outcome of a cricket match. I became gripped with the uncertainty of the card I would be dealt that day. I realized that we become very set in our thinking, and the tarot cards bring a fresh new perspective. It reverses polarity and creates a new line of thinking I hadn’t considered before. It might offer clarity and help one get unstuck. To this, I approached the theme of ‘Change/ce’ by making an animated film about using tarot cards to mitigate the uncertainty of life.

The wonderful thing about tarot cards is that they allowed me the freedom of telling a story with symbols and metaphors. I’ve tried to put easter eggs and clues in plenty of shots because I love intricate stories with layers.

Death was the first card that I ever drew from a pack and naturally it was the first card that I animated. I’ve tried a portray a metaphorical death here. One where the protagonist, M, led by her mentor, Death, finds the tools or the sword to destroy her fears that have taken the shape of a millipede. For some of us, in 2020, we were forced to become still and observe the patterns in our lives that don’t serve us anymore and cut them off and become a more authentic version of ourselves.

7 of pentacles was the second card I animated. I’d read an article in Indian Express about the impact of covid on flower farmers in Doddaballapur taluk- it made me think of all the hours and faith they put in their work every single day. In the film, a floriculture farmer splits himself into 12 to do his daily chores around his polyhouse. He toils round the clock, not knowing if his hardwork and perseverance will yield results or flowers.

Justice was the last card I animated. The theme was fairly simple- to have balance between logic and intuition. Change is inevitable and it can often feel like we’re not in the driver’s seat. But using cards to interpret one’s life and tap into their own intuition to decide the outcome, makes one feel like a protagonist of their life’s story.

BF: You also mention inspiration from folk tales, theatre and South Asian architecture which we can see here. Can you tell us a bit more about those sources of inspiration and whether there were others that were particularly important to you?

I’ve been gripped by the architecture of palaces and temples in India since childhood. My family would visit old temples and ruins from ancient dynasties and look at paintings on the stone-carved temples and lose ourselves in it. The hall of pillars where M gets lost inside is inspired by the Hall of thousand pillars in Meenakshi Temple in Madurai.

I love Indian shadow puppetry, particularly, Tholubommalata or the puppetry of Andhra Pradesh. The basic elements of the show are the white screen, lights and puppets. Similarly, the puppets I make are hand-drawn, cut, coloured and sewn together, decorated with perforations, and shot while they are backlit. Also, in ‘Death’ there’s a white screen or a veil that mirrors her fears.

The dramatic lighting of theatre in plays and dance, changes/highlights the mood, tone and atmosphere of the stage. In ‘Change/ce’ the spotlight is used in storytelling. It brings attention to the protagonist. (Very easy to lose her in the scene with the bullfighting amidst a crowd in ‘Justice’ arc) When M looks into the veil-like mirror in ‘Death’, the spotlight focuses on her fears and shows the inner workings of the truth.

BF: At the start the animation looks very hand-drawn as if it was made with pencil, which is quite different from the shadow play style of the latter part of it. Why did you choose these two styles to represent your story?

The drawn animation is the present day for M. Drawn animation suits this best to exaggerate the amount of change we felt when the virus struck- how 2020 a seemingly normal year turned course. It’s devoid of exciting colour- her version of black and white. Almost drawing sickness from the virus- painted in a version of yellow.

The tarot world, in contrast, feels like a faraway fantasy land. The cutouts and puppets, to me, evoke night time storytelling, fairy tales and story books. It makes room for the extraordinary. It resonates with the foundations’ topic of Change, sets up the stage and allows for unexpected and exciting visuals, like the transformation.

The real reason is probably that my camera stopped working before I could shoot the puppets and was stuck in the shop for a long time because of the lockdown. In the meantime, I did the drawn animation.

BF: The stars and graph paper seem to be fighting during the ‘Justice’ section of the animation. What do these symbols mean to you?

Logical thinking is the step-by-step approach to problem solving that is deliberate, slow, focused, built on facts and is the mathematical truth, but cannot solve problems that one does not have sufficient data on. Intuitive thinking is impulsive, chaotic, random and can create new knowledge/ solution. Perhaps the most interesting and fun approach to solving problems is intuitive thinking that calls on logical thinking and otherwise.

In the film, M is haunted by her fears represented as mathematical expressions: for example, Venn diagram of time-zone of her friends not overlapping. Too much logical thinking has caused her fears to become a monster, the millipede. In the Justice section, she learns to balance the two. 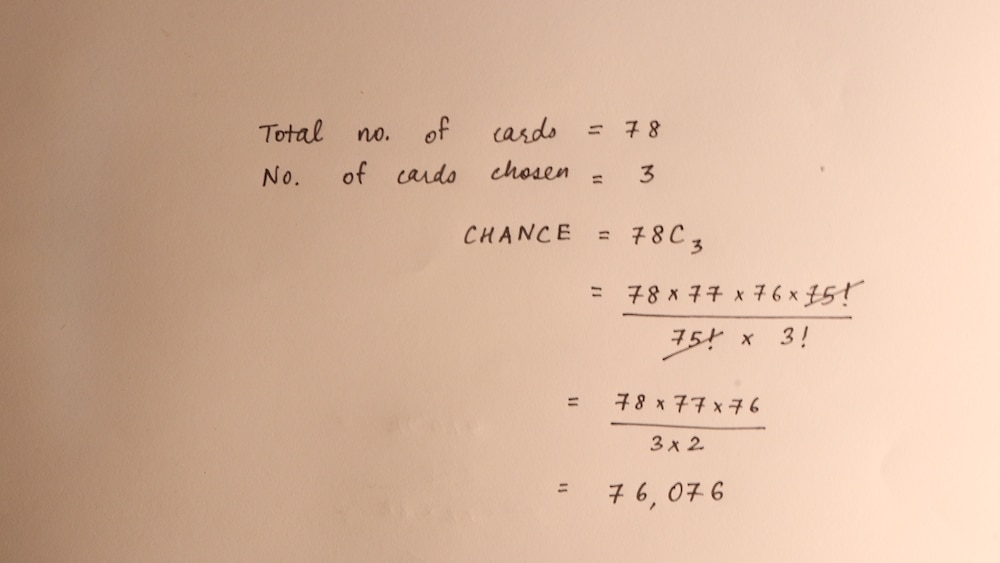 BF: The work touches upon such a universal tone of trying to make time for friends, family and life during COVID, then drowning in the despair of a lack of human touch. But each Tarot card restores the balance and nourishment of the protagonist, even death, which breeds new life! How did you develop this storyline?

When I wrote the proposal, I began with a simple storyline- a 3-5 minutes (final cut is 05:43) narrative piece of a woman’s journey during the Covid 2020 pandemic that reflects our times and one that is hopeful, interlaced with humour. It was this:

A woman is at wits end. She discovers a deck of Tarot cards in a dream/ fantasy underwater realm. Each card teaches her a lesson. Back in her bedroom, she learns to create her own reality.

When I started developing the script and drawing the storyboard, more themes emerged. For example: 7 of pentacles is a card that teaches hardwork and perseverance at work, even when one cannot see the rewards at the beginning.

I’ve tried to intertwine this theme with the theme of time. During the first wave, for a non-essential worker like me, it felt like the days were blurred and we were stuck in a time loop that wasn’t meaningful. This is shown in the film as clocks without dials. The dials would only tick (hence, time was meaningful) when M called her family over the phone.

So, in 7 of Pentacles, in addition to the theme of hardwork, I’ve tried to incorporate how one might find meaning in the limbo we felt. From the card, I understood that the flowering is a result of the farmer’s hard work. It showed promise and faith in time; that alone can make us feel like we’re moving in the world. So, in the film, the flowering trees transform into the dials of life’s clock and it begins to tick once again. (Set in the Floral clock in Bengaluru’s botanical garden Lalbagh) 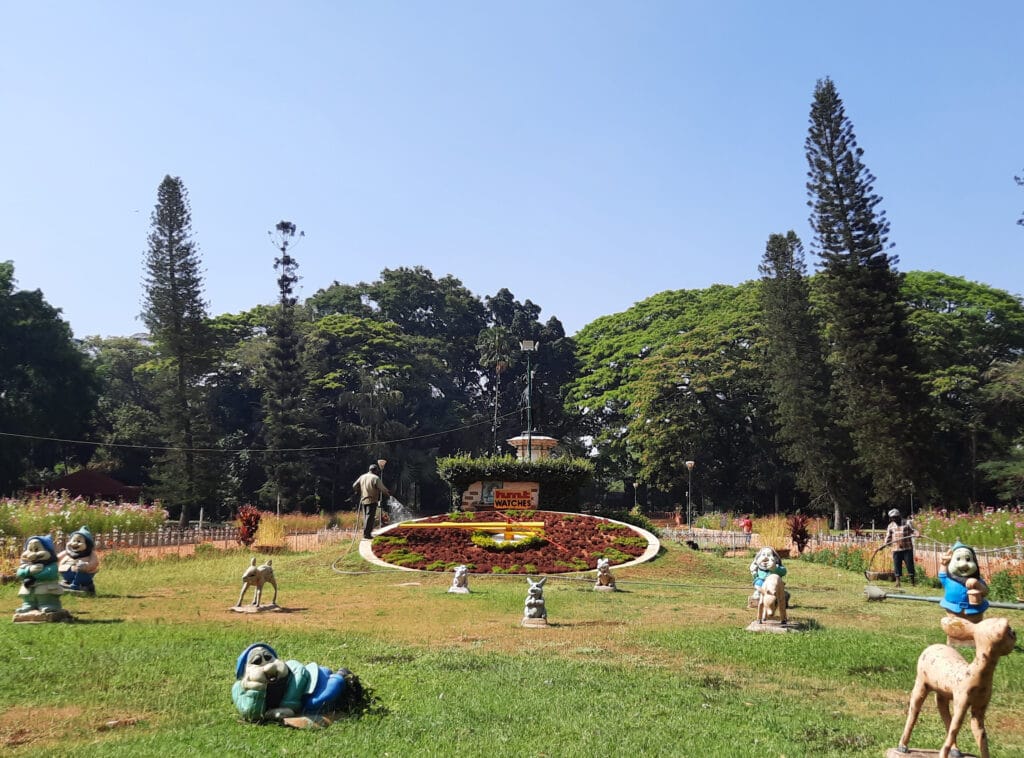 BF: What is next for you Meera? Where can we see more of your animations?

I am currently in the pre-production stage for a new animated short “Kannagi” based on the Tamil epic, Silapathikaram. I am hoping to pour more time into that project soon.

My showreel and bits of animated pieces are present on my Vimeo page.

Read more about Meera’s animation ‘Change/ce’ here. The animation is accessible until 5 September 2021.

Meera Krishnamurthy is an animation filmmaker based in Bangalore, Karnataka. She has an MA in Animation Film Design from Srishti Institute of Art, Design and Technology. Her graduation film, “A Flowering Tree” was screened in 50+ film festivals including Animafest Zagreb, LA International Children’s Film Festival and River to River Florence Indian Film Festival. It won a jury award at Palm Springs International Animation Festival & Expo, CA, USA in December 2019. Her main interest lies in telling women centered tales. Her work is inspired by Indian art and architecture- particularly South India, folktales, fairytales, theatre, old Tamil songs and photographs. She is a student of the Carnatic Saraswati Veena. When she’s not playing veena, she is brawling in taverns of Hearthstone.

Interviewed in July 2021 by Chelsea Pettitt, Head of Arts

All images are courtesy of the artist.