BF: Back in 2015 and 2016, the Bagri Foundation had the privilege of supporting two performances ‘Prisms of Love: Sufi Tales Through Storytelling’ and ‘Spring in the Season of Love,’ in association with the British Library and The Prince’s Foundation School of Traditional Arts at SOAS, respectively. The first incorporated kathak dance, whilst the second brought in Indian classical music, both reflecting the interdisciplinary nature of Indian arts. How did you find the experience blending live storytelling, poetry and performance?

VN: The interest that the Bagri Foundation gives the oral tradition of storytelling is greatly valued for me as a performance storyteller of 30 years training and practice in Britain. As the Storyteller and Artistic Director of Prisms, I took to researching the archives of the British Library for their collection of the  fifteenth century sufi romance written in verse: Padmavat, illustrated manuscripts by Muhammad Malik Jaisi.

The illustrations were of a commission from the eighteenth century done in Muzaffarpur. It was a privilege to invite SOAS Professor of Hindi, Francesca Orsini, whose renowned scholarship on such texts and their transcription offer nuanced readings into variations from the original. Why? Because it represents the fluidity of the oral tale tellers recalling narratives in cultural currency at the time, reflecting our own time.

Having acquired the permission from the British Library, I wish to thank Jonah Albert for the digitization of 16 images that I selected.  My intention from the beginning was to have a story that is transposed as an experience of a Sufi romance relevant to our times about a voyage into the space of reflection, while there is historic and political tumult externally. It is also conveyed a vibrant ethos, a cultural Casbah that reflected the multicultural London of 2015.

Throughout my direction and creation for Vayu Naidu Intercultural Storytelling Theatre I have integrated dance and music, contemporary or world traditions – but to serve THE STORY, since I received an AHRC grant as well as funding from Arts council England to explore this. So with a historical text, it seemed natural to combine art forms and cultures. The oboist was composer and performer Melinda Maxwell, on Tabla composer Sarvar Sabri and Kathak dancer Sonia Sabri. With my composition of Storytelling in English, PRISMS attracted general interest and diverse audiences, bringing to life the multicultural casbah of our own time.

Visually I wanted to combine word-movement-music to give the three dimensionality of the magnificent work that Jaisi wrote with colloquial textures about baramasa – the six seasons of north India, the sixteen types of women, astrology, competition – epic voyages, moral choices, historical machinations. I’m touched by Alka Bagri’s attention to storytelling performance traditions too. 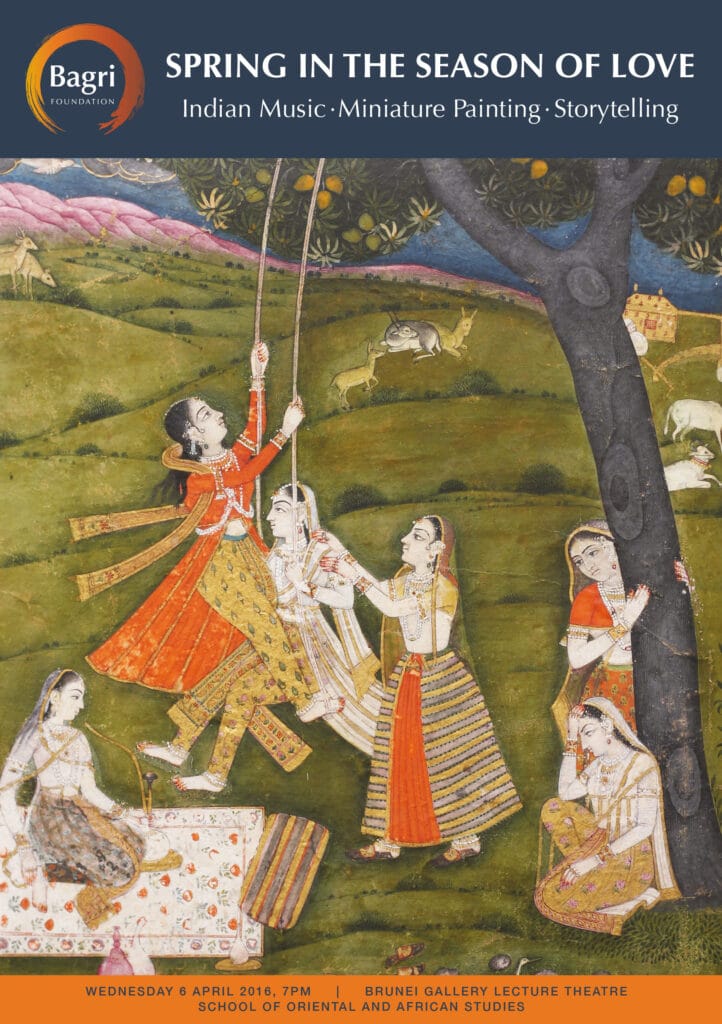 BF: Your practice encompasses many disciplines and approaches, blending writings, live storytelling, academic research among others, in a powerful combination that, as you state, ‘is inspired by the unnoticed drama of daily events that challenge and change us’. How are you developing all these streams of work in the current climate?

VN: By moving what I do to an online platform. It is interesting, the liveness of Storytelling is a living breathing audience, but I’m starting my series LICENCE TO TELL, as a Vayu Naidu Storytelling event online. If people who are listening are taken into their imaginations, there is no need for sets or location. It is the power of the creative word and what the story is. I also run THE WRITE PLACE by the south eastern coast of the Bay of Bengal at Mammallapuram. www.vayunaidu.com/thewriteplace

BF: In these times of sudden change, love seems to be the international language that we all must learn to speak. We wonder how you think the appreciation of the Sufi romance has evolved over the years?  What role do you think love and Sufi romance can have in learning how to build our shared future?

VN: You are so right about the language of Love. The more we look at the world classics and epics, it is Love that has won over in spite of the hardships and material seductions. The Sufi romance survived with its cross pollination from local cultures in Northern India mingling with the village and court sophistications of hindu motifs, music as well. The casbah offered a sharing of inspired tale telling and poetry in the market places. There was also Sufi Sophistry but that was intellectual and for debates. The real love was in embracing diversity and finding the common thread and the universal value. I hope that in the future we continue to value specificity, but do not forget connectivity. Love is that invisible arrow that hits the mark.

Dr Vayu Naidu was awarded the first PhD in Storytelling at the School of English, Leeds
University exploring Indic oral traditions in contemporary western theatre and their
resonances. Her transposition of classics, epics and folk tales with her methodology,
gives the past a presence to contemporary audiences.
Vayu Naidu Intercultural Storytelling Theatre Company, an RFO of Arts Council
England toured Ramayana among other works across Britain, Scandinavia, Europe
and India. She created and commissioned new work with Storytelling as spoken
performance accompanied by Contemporary Music, Jazz and World Musicians,
Contemporary and Classical Dance. She is a novelist of historical Fiction and her
Sita’s Ascent Penguin:2013) was nominated for the Commonwealth Book Award,
and The Sari of Surya Vilas ( Speaking Tiger -India, Affirmpress -Aus/NZ: 2017) was
ABC Book of the Week for India’s 70th Anniversary of India’s Independence. She is
currently a Royal Literary Fund Fellow at RHUL, History completing her
forthcoming novel set in seventeenth century England and India.