BF: The Foundation still remembers your talk, Unlocking Iranian Cinema as part of the Bagri World Cinema Club at Asia House in 2014. In the quote we shared at the time you stated that ‘Iranian cinema has its own distinct cinematic language that champions the poetry in everyday life and the ordinary person by blurring the boundaries between fiction and reality, feature film with documentary’. Can you tell us more about how you think this language has been evolving from your talk to today?

Rose Issa: Difficult to answer, as the film scene has changed a lot in the last few years. I stopped working with film festivals more than a decade ago, and hence have lost touch with world cinema, and you have to be in touch with the rest of the world to compare and assess. Meanwhile Abbas Kiarostami died (2016), without seeing his own last film, 24 Frames, edited by his son and friends and shown in Cannes 2017; Jaafar Panahi‘s films were made while under house arrest, such This is not a Film and Tehran Taxi, an example of a director who has been forbidden to make films or write scenarios; so we learn that some can overcome interdictions or restrictions. You have to have something to say. As Rumi said, ‘Whatever comes, comes from a need, a sore distress, a hurting want’. And then there are other talented filmmakers, Asgar Farhadi’s provocative moral conundrums, Bahman Farmanara’s love of disappearing traditions, to keep us alert. I think of the Mohsen Makhmalbaf team, or Bahman Ghobadi’s, both in exile, and their disappearance from the world scene, and that is sad. How many films can you make outside your country, your language, your culture?

But of course, there is a world crisis for cinema theatres, and the over presence of digital directors, let alone the overwhelming presence of Netflix type outlets and monopolies. We are witnessing major changes everywhere in the last decade.

BF: As a curator, writer and producer you moved to London in the 1980s and since then you have been championing visual art and film from the Middle East through a series of national and international exhibitions, talks, and also through your publishing programme at Rosa Issa Projects. Many artists you’ve introduced to the UK have been collected by the Bagri family over the years. Could you tell us a bit more about what you are working on now, and next, and how you are continuing to platform and disseminate knowledge about outstanding talent from the Middle East?

RI: I have been mainly focusing on publishing books, curating fewer exhibitions, giving some educational talks….while travelling a lot to Iran and the Arab world.  I edited and wrote a wonderful book, Signs of our Times, From Calligraphy to Calligrafitti, (Merrell publishing) which covers three generations of artists, who use the morphology of letters, or words, to express themselves. On the 50 artists selected only 3 were calligraphers. This should have resulted in great touring exhibitions, but institutions are sleepy, or make mediocre versions of it, add religion to the title, and all the things the artists and I were avoiding in the book… but it will remain a reference. Since then I have written and edited another book in collaboration with Saqi Books, Arabicity which was the result of some 6 different exhibitions and catalogues that I did in the last 12 years, from Reorientations at the European Parliament (2008) to Ourouba in Beirut Art Fair (2018), to the recent Arabicity exhibition in Washington DC, at the newly opened MEI, Middle East Institute (2019) … there will be another Mediterranean version of it in Malta (was supposed to open in June 2020, but postponed to June 2021 because of the Covid 19) so still working. 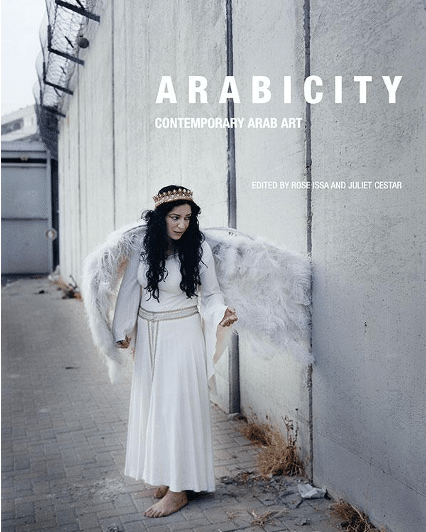 BF: Artists can reimagine worlds and create new ways of thinking about our present and future. We wonder, as a curator, which artists do you consider are making the biggest impact on art from the Middle East and its future, given the crisis that we find ourselves living in now?

RI: When you are a good artist, you have the pulse of the country. The ones I work with or admire get the urgency of the situation, conceptually, aesthetically and socio- politically.  All artists in the books I published are relevant, have significant works that reflect the tensions and beauty of our culture, reflecting thus what is important, relevant or urgent. I stand by most if not all of them with whom I worked or published. And I am still discovering new ones. Which is a blessing.

Rose Issa is a curator, writer and producer who has championed visual art and film from the Middle East for more than 30 years. She has lived in London since the 1980s showcasing upcoming and established artists, producing exhibitions with public and private institutions worldwide, and running a publishing programme.

Through curating numerous exhibitions and film festivals, she introduced Western audiences to many artists who have since become stars of the international scene, including: Ayman Baalbaki, Shadi Ghadirian, Monir Farmanfarmaian, Bahman Ghobadi, Hassan Hajjaj, Farhad Moshiri, Abbas Kiarostami, Rashid Koraichi and Nja Mahdaoui among many more.