BF: Nasri, you expertly hosted two of our events related to short film, Tales of the Silk Road Lebanon and Jordan. What is your background with film and media and how did you find yourself working in this field?

Nasri Atallah: I don’t know about expertly, but thank you. Those were a ton of fun. Giving a platform to films from the Middle East in London feels really important, it’s a window into our world that’s away from the news and other forms of hysteria. Personally, I’ve always been fascinated by film and media, even though I never thought it could be a career for me. When I was doing my Masters in politics at SOAS in 2003, I somehow managed to make my thesis about identity and Arab satellite TV. So I should have taken the hint back then. But it took me over a decade to get closer to the field. In my last corporate job, I found a way to make promoting Lebanese cinema at the Cannes Film Festival part of my responsibilities, toured with a band, and even commissioned a TV pilot, even though we weren’t a production company. Around six months ago I decided to make the leap properly into film and television production by founding Last Floor Productions with two close friends, Firas (who you might know from Mashrou Leila) and DC who I worked with on the aforementioned pilot. We’re really excited because we’re trying to bring our 10 years’ experience each in entertainment to the project by making the kind of Arab shows we’ve always dreamt of seeing. Thrillers, horror, crime. Genre stuff that no one has let people from our part of the world make properly so far on the global stage.

BF: You also interviewed fellow authors as part of the Bagri Foundation Asia House Literature Festival. What stories do you feel are missing from mainstream literature and pop culture? Do you have any advice for those who are struggling to tell these stories?

NA: I think if you’re from the Middle East and you write in a language that isn’t native to the Middle East (so English, French etc), you are only allowed to tell a handful of stories and most of them revolve around misery and oppression. No one wants a small intimate drama about, let’s say, the disintegration of a middle-class marriage by an Arab, but that seems to be all they want from white middle class authors. The Arab story has to be full of social layers and overarching themes that will be familiar from the news. We’re not allowed to be individuals, whether it’s in our stories or as creators. We have a burden of representation on both sides: to the non-Arab audience we have to conform to the stories they’re comfortable receiving (or, at best, to the level of discomfort they’re ok with) and to Arab audiences we need to be beyond reproach because all of this responsibility of representation is being channelled through the handful of people who are allowed a voice on the global stage. I have a real desire to just see more fun, pulpy, genre stuff from the Middle East, especially in English. Like a proper Arab noir detective story, the kind Parker Bilal does brilliantly with the Makana series. I think in Arabic we manage to tell a broad range of stories, but the ones that make it into English, and to global audiences, get narrower and narrower.

BF: The podcast you began during the UK lockdown with Alya Mooro, called Bootleg Magic, is a great response to the social distancing limitations. How do you think this major shift will impact art making across borders in future?

NA: Thanks! Yeah Alya and I got asked to pitch a podcast by some producers in London last year and the whole thing kind of got lost in development hell and fizzled out. It was disappointing. I think we might have been a bit hard for them to place in their portfolio of shows. Both Alya and I are very proud of being Arab but also think that we’re allowed to talk about, well, anything from Gogglebox to TikTok

Why are Arabs only allowed to talk about Arab culture? Anyway, during the pandemic we realized we didn’t need someone to tell us we could do it, we just got some podcast mics and started it pretty lo-fi. Suddenly with the stakes so high in the real world, our little podcast could start without being perfect. I think a lot of people will think that way now, they’ll remove some of the layers of anxiety around just trying something.

I think the pandemic has been an accelerant across different industries. Things that would have needed months of approval happen in an instant. Projects that seemed impossible, or even the possibility of having a meeting that wasn’t face-to-face seem completely normal. In a pre-pandemic world where impossible visas & limits on freedom of movement were already a reality for many artists from across the world, the ability to level the playing field through new ways of doing things is exciting.

As for making art across borders, at Last Floor we’re currently shooting a TV show remotely, in lockdown, across London, Beirut and Jeddah. It feels a bit crazy, it’s something we would never have thought of a few months ago but now it feels natural and exciting. I think we can keep these possibilities alive when the medical emergency is hopefully behind us. 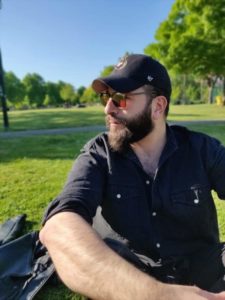 Nasri Atallah is a British-Lebanese writer and producer. He is the co-founder of Last Floor Productions, which is dedicated to creating compelling, character-driven genre fiction for film and television, with a focus on bringing a diverse range of Arab voices into the global entertainment industry. His writing has appeared in publications including The Guardian, GQ, Little White Lies, Monocle, Brownbook, and Time Out. He is the co-host of the Bootleg Magic podcast with Alya Mooro, and a regular guest on the BBC Arts Hour. He lives in London with his wife, Lebanese designer and textile artist Nour Hage, and their cat Izzy.

Interviewed by Chelsea Pettitt, Head of Arts – May 2020