BF: We had the privilege to work with you on our At Home in the World open call with your submission of a series of cinemagraphs called hot B stars. We would love for you to unpack the visuals for us a bit…the subtle movements and formations for each piece – Air, Phoenix, Someone Named Humanity and Lake of Longing – were stunning. What meaning did these images have for you and what inﬂuenced them?

JKR: At Home in the World came at a time where things felt (for me and I suspect many others) quite overwhelming. The pandemic was sweeping across the world and there was little any of us could do to change it. So I wanted to create something that would help audiences to re-focus and re-centre, and provide a bit of escapism. The images used in hot B stars were taken during my time in Malaysia and China, so for me these images represent memory, journeys and possibility. I was very much inﬂuenced by Franck André Jamme’s collection of 17th century tantric paintings from Rajasthan called Tantra Song. The geometric, vividly hued shapes are akin to 20th century art from the Bauhaus and Minimalist movements, an incredible connection that spans hundreds of years and from such diﬀerent worlds. Jamme describes tantra devotees meditating with the artwork; colours begin to shimmer and shapes begin to leap from the pages. I wanted to try and recreate this sense of attention and microscopic movement in the visuals of hot B stars; I wanted to create something slow and purposeful.

BF: You have just released an exciting new opera via Instagram called Nineteen Ways of Looking. Described as an anti-racist digital opera that responds to the prejudice shown towards those from East/South East Asian diaspora during the pandemic, it is another timely digital work. What do you hope is the impact upon viewers of the opera? Why was it important for you to make it now? 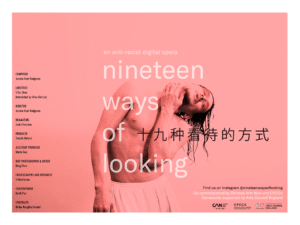 JKR: nineteen ways of looking (NWOL) is an embodiment of the very themes it looks to dissect – isolation, media, discrimination – integrating social media into the design of the opera. Free and available to access internationally, it makes the most of what we have available to us during lockdown, using technology to shape and rethink the theatrical form. It embraces the challenges of social distancing using arguably one of the world’s most important platforms to create art, perform to and interact with audiences.

Although centred around the discrimination faced by the BESEA (British East/South East Asian) diaspora – the rising prejudice as a result of the pandemic and ancient stereotypes – it equally explores our shared experiences of isolation, of longing for connection. nineteen ways is about empathy, or moments where there is a lack thereof. By bringing together a plurality of voices, it’s a reminder of our humanity too.

The project reaches out to the BESEA community in solidarity, very much inspired by the strength of the Black Lives Matter movement, a call to unite and speak up about important issues that have long since shaped our lives in the UK and Europe.

The East/South East Asian community is very much a part of the conversations on race taking place in Britain right now, so secondly, I want to connect with other ethnic minorities who share similar experiences of being ‘othered’. For instance, NWOL has moments that reﬂect on the recent Black Lives Matter events and our culture’s part in the whole discussion.

Thirdly, I want to engage audiences who might challenge the idea that racism even exists, who do not consider the impact that British history, both colonial and post-colonial, have had on people who rightly call the UK their home. Xenophobia has been peddled by our governments and media for far too long as a means of control and distraction – the ultimate dead cat! I want audiences on both sides of racial discrimination to have a frank and transparent conversation with each other. 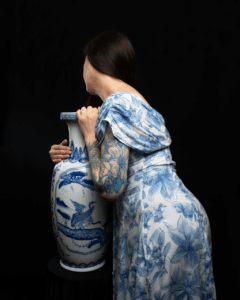 BF: Before 2020, you were best known for your musical composition, but you’ve moved deftly into these new digital platforms with strong visual artwork. How have you navigated this transition and how has 2020 impacted your visual arts commissioning practice? What do you think you’ve learned to do diﬀerently in future work? Or to put it another way – where do you go from here?

Alongside music composition, I’m very lucky to work as a producer with Fury Films and producer, Kate Wilson. Film is such a collaborative art form, it’s deﬁnitely had quite an impact on me as an artist. When I was younger, I actually wanted to be a ﬁlm composer! I think it stems from a love of storytelling. Over the years I’ve created more and more cross-arts work, working with incredible collaborators from ﬁlm, dance, spoken word worlds etc, learning each time around and slowly building up the conﬁdence to create/work with visual artwork myself.

2020 has meant having to re-mould most commissions and projects for digital platforms. Whilst it’s been a tough year, I have to admit that I’ve really enjoyed the challenge of thinking creatively about a work’s exhibition as much as the making of the ﬁnal product. The context of any work is as important as the work itself, and there’s so much that can be done by partnering visual art/music together with technology, space, architecture etc. Treating them as equals and seeing what happens as a result has been my biggest takeaway of the year. Commissions like At Home in the World have really supported that discovery as I broaden out into visual art, and I look forward to next year, where I hope to create more ambitious multidisciplinary work with even more ambitious visuals! I shouldn’t tempt fate, but if everything goes to plan, you can expect some bold animation, climate crisis meets opera x ﬁlm and another web-based music project centred around personal memoirs. 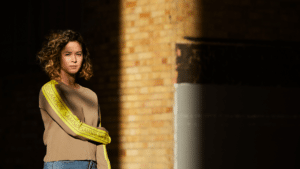 As Producer, Jasmin adds another level to her portfolio, creating bold new platforms for her music including visual artwork, site-specific and multidisciplinary theatrical productions. A driving force behind where and how her work is experienced, she often experiments with unique set-ups such as audiowalks, interactive installations, underground nights, moving image, 360° film and more.

In 2018/19 she was a British Council PRSF Musician in Residence, living and composing for two months in Lanzhou, China. In 2017/18, she was a London Symphony Orchestra Jerwood Composer, and was mentored by composer Errollyn Wallen and director/producer Jude Kelly. In 2019 she received a PRSF Women Make Music award for her site-specific music production TRIPTYCH. Her music and live productions have been performed across the UK and internationally with partners including London Fashion Week, World Music Festival Shanghai, Attakkalari Bangalore, Edinburgh International Festival, Wilderness Festival, Roundhouse, Shoreditch Town Hall, Barbican, Oxford Playhouse and the Royal Albert Hall. Her film scores have featured at festivals such as Sundance, SXSW, Toronto International Film Festival, Kaohsiung International Film Festival and the London Short Film Festival.

Activism has an important place within Jasmin’s music. Much of her work investigates and challenges ideas centred around the female body, sexuality, race and cultural heritage. An advocate of gender and racial equality, her wider creative work includes delivering mentorship programmes for young artists, speaking at international industry forums and events, and arts activism projects that seek to empower both community and artists.

-Jasmin Kent Rodgman was interviewed by Head of Arts, Chelsea Pettitt via email in November 2020