Alessandra Cianetti: Last year you curated the memorable season ‘Poetry in Motion. Contemporary Iranian Cinema’ at the Barbican Centre. We were humbled to be able to support such a powerful and well-curated programme that showcased emerging voices in contemporary Iranian cinema through the prism of Persian poetry. As the co-curator of the season, alongside Faye Harvey, we would love for you to tell us more about the process that brought you to conceive ‘Poetry in Motion’ and why you decided to focus on the Persian tradition of storytelling as seen through cinema?

Elhum Shakerifar: Being British Iranian, the question of my identity has been omnipresent throughout my life – though its presence has mainly been the question of my identity as explained to me by other people. It is _________ [select adjective of choice: tedious / disappointing / upsetting / eye opening (though not always in a good way) / exhausting / baffling] to come from a country so problematically mediatised, persistently over-politicised as well as on the other side of things, disturbingly exoticised. It carries such a weight that I have seldom had the courage to venture into this space with my work. Perhaps also because the space of identity is as personal as it is confused, nuanced, and constantly in flux.

But there is nothing quite like an open brief, which is what I was given in working with Bagri Foundation. A gift of trust, time and space. An open brief is a vote of confidence that enables you to jump into a space that you haven’t dared venture into before… and with that little bit of confidence, the risk or challenges that once held you back become something to engage with, in a space of curiosity rather than fear.

I first met Faye in 2017 at Shubbak – the festival of contemporary Arab culture for which I curate the film programme; she understood the meta-narrative I had woven between films selected that year and was keen for us to collaborate in some way… our initial conversations found common ground in a love of Iranian cinema, and so this journey began.

I have always felt that Iranian cinema – as viewed from the UK and more broadly the Western world – suffers from similar problematic frames, similar to those that flatten my hyphenated identity. A single film will carry the burden of many expectations, of being representative – of a country, culture, history, current politics etc. The magic of Iranian cinema’s new wave is read through a political frame and interpreted primarily as a response to the constraints of censorship. Iranian women… don’t get me started. This season came about as an attempt to challenge these frames – to invite people to look at Iranian cinema through new eyes, to be open enough to see films as the stories their filmmakers wanted to tell.

Poetry emerged as a natural frame – it is ubiquitous in Iranian life. Iranians will often consult the poet Hafez’s Divan for direction, almost like a fortune-teller. His words carry as much ambivalence as they do guidance. Perhaps the direction he gives is the result of providing the right space for reflection.

This season attempted to use that ethos to engage with cinema – to provide audiences with a different kind of roadmap, an openness: poetry. 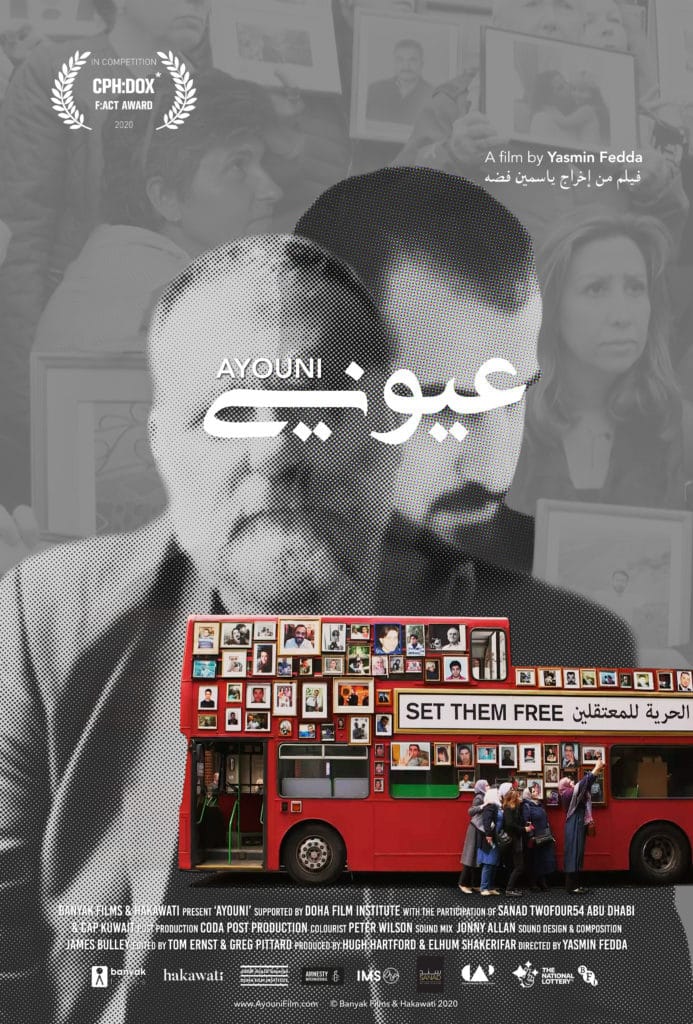 AC: As a BAFTA nominated producer and curator, you have founded Hakawati, a company that produces, distributes and curates ‘films that hold the art of storytelling at their core’ and enables new talent to take creative risks. We would love to hear more about yours and Hakawati’s current projects and directions, especially in this curious time of momentous change.

ES: Hakawati means ‘the storyteller’ in Arabic, and all our work carries that notion – whether making, distributing or curating films, we believe firstly that the story is in the telling. We focus on quieter voices, and unique individual – often minority – perspectives in relation to a dominant whole. Narratives are built around everything, often enabling what gets seen and what doesn’t – and so as a creative company, we are very conscious of the stories we tell, and the responsibility of representation we bear, in knowledge that the stories we tell come to represent us, and shape the world we live in.

As for most people, this is a strange time, and nothing is quite as it was before. As documentarians, we are used to things not going quite to plan… the French filmmaker Francois Truffaut once wrote that “life has a lot more imagination than us” – which speaks to why I am inspired by the space that documentary opens for storytelling and for understanding the world. At such a time of uncertainty and sadness, I feel that the experiences I have been privileged to have through filmmaking and crucially the people I have met along the way, have equipped me with perspective. The grounding that perspective can give you is my current bedrock – as a producer, whilst it’s important to think of the immediate, and long-term impacts of the present reality, it is equally important to not lose perspective on the subjects we’ve been reflecting on for years, to remember that we’ll only understand the big picture with some distance.

At the forefront of my mind these past weeks, are two films –

I’ve been working closely with Steven Eastwood on the development of a new project (currently titled Neurocultures) that questions what cinema would look like if it had been conceived of from a neurodiverse, rather than a neurotypical, perspective. It is one part of a Wellcome Trust project exploring the relationship between autism and cinema, and it has been interesting to reflect on how self-isolation and quarantining at home are not equalising situations, but actually highlight how the world operates according to rigid norms. Some of the flexibility we’re seeing emerge around communication, engagement and access, indicate that it is possible to conceive of how things can work differently – the neurodiversity movement is fast growing and emphasizes a paradigm where the autism spectrum is seen as a result of natural variations in the human brain rather than a disorder to be cured; it suggests that different people have different minds and different styles of thinking, and that environments need adapting, rather than individual behaviour.

The second film is one we recently completed: Ayouni by Yasmin Fedda, which received its World Premiere in F:ACT Competition at CPH:DOX… online. It was strange, of course, to not be able to experience the film with an audience, especially after 7 years in the making, particularly given the film’s subject matter – forcible disappearance in Syria, told through the prism of two women looking for their loved ones. One is Bassel Khartabil, software developer and Syria’s Creative Commons representative, the other is Father Paolo Dall’Oglio the well known Jesuit priest – essentially two men who broke boundaries literally and metaphorically with their work and believed in a more connected world. Ayouni is a story of hope and courage – of communities forming to challenge and stare down abuses of power – that we shouldn’t lose sight of at a time of global uncertainty. Ayouni is available to stream online worldwide, with subtitles in 7 languages (English, Arabic, French, Italian, German, Spanish and Russian), on www.AyouniFilm.com

AC: In your beautiful piece for MUBI, Reframing Iranian Cinema, you mention that curators act as bridges. Looking at the future, which kind of bridges do you think film curators must build for their work to continue to be relevant?

ES: There are currently a lot of conversations in the film industry about accessibility, about access to foreign language film, about gender parity, about class – anything that used to be filed under ‘different’ (You would be right to ask – different to who?). These are necessary conversations – the film industry in the UK is an old machine, aspects of it are large and unwieldy. In curating work in this country, I think it is important to build bridges between the past (colonial, in particular – there is a particular amnesia around this) and the present, between countries (especially as we become an ever more isolated island), between people, cultures, between the present and the imagined future. But within all these spaces of reflection, it’s also important to pass on the baton after a time – to move through spaces rather than claiming turfs so rigidly. If progress from discussion to action is slow around many of the accessibility debates, it is because the dominant narrative prevails structurally. Curators act as bridges as translators might – providing the frames through which to engage with a piece of work on its own terms. It always benefit the space, the form, the frame, to collaborate, to welcome in new perspectives, to be challenged. But it is also a particular struggle to be a lone voice of so called ‘difference’ within a structurally unchanged machine, and this too is a real challenge.

I referred above to Neurocultures, the project I am currently developing with Steven Eastwood. The autistic community has long been managing social exclusion and isolation – there is so much to be gleaned from that experience; and these insights offer benefits for every community. That film project as a whole highlights a question we should be asking ourselves right now in curatorial and other spaces: what new social dynamics are possible if we shrug off the restrictions of an old world built on hierarchies.

The conflict between cultural relevance and commercial return is a constant struggle in the UK, and this is a significant challenge for curators: to protect and to celebrate spaces of open, sometimes more challenging reflection. Audiences of 5 should matter as much as audiences of 100 in this respect – we should fear how monotone the world will look like when we all watch the same thing. More importantly, that audience of 5 might grow to an audience of 100 if it only had the chance to form roots. That audience of 5 might be an audience that really needed to find each other, and to meet that film. These spaces are important, as much as the so called safe space of guaranteed financial return, which is a different game altogether (survival of the biggest marketing budget).

To return to my opening thought, in celebrating the beauty of an open brief, I wanted to underline how rare it is to be given a combination of trust and space to explore ideas. Curating the Poetry in Motion season took a year on paper, but the work was informed by a myriad of experiences, reflections, discussions, travels, viewings, and encounters. Some of these will not even feel consciously related, but all these little ingredients have their role and reason. It always takes a surprising amount of salt to perfectly season white rice.