We are pleased to announce the full programme for the Bagri Foundation London Indian Film Festival 2019 edition!

The 10th anniversary of the UK and Europe’s largest South Asian film festival, supported by the Bagri Foundation and the BFI runs from 20th June to 8th July across 5 UK cities, and continues to showcase a rich assortment of entertaining and thought provoking independent cinema, including India’s new wave of LGBTQ+ films.

The 10th birthday celebrations open with the World Premiere of Anubhav Sinha’s hard-hitting Article 15 the follow up to Mulk, which won Sinha the Filmfare award for best original story in 2018. India’s hottest male star Ayushmann Khurrana (Andhadhun, Badhaai Ho) plays a police officer from a privileged urban, international, background, whose very first posting is to rural north India, where three teenage girls have gone missing. His honesty does not sit well with the existing, deeply entrenched corrupt system where, in 2019, a 1000-year-old practice that divides human beings on the basis of caste continues. Beginning as a riveting police procedural that is a True Detective like deep-dive into the Indian bayou, Article 15 soon elevates to a gutsy exposé of a deeply flawed structure. The film’s title is a reference to an article of the Indian constitution that prohibits discrimination on the basis of caste, religion, race or sex.

Zee Studios will release the film in the UK and worldwide June 28.

The long-awaited return of Ritesh Batra, the director of BAFTA nominated, Cannes Grand Rail d’Or winner The Lunchbox which is world famous, with the English premiere of Photograph, starring legendary actor Nawazuddin Siddiqui, and the star of 2018 Bollywood hit Badhaai Ho, Sanya Malhotra.

Bengal Tigers
Highlighting this regions unique contribution to Indian and world cinema. There is an opportunity to catch Bengal’s hottest new talents with films like eerie sci-fi Ghost of the Golden Groves, or relationship drama Unsaid, to legendary film-makers including a Q&A with one of Kolkata’s finest master’s Buddhadeb Dasgupta alongside his magic realist film The Flight. We also honour the recent passing of director Mrinal Sen with a restoration of his classic Khandhar and offer a rare screening of Jean Renoir’s The River at new venue partner Cine Lumiere.

Young Rebel
Keeping our reputation up as the Punk Rock of Indian film festivals our strand Young Rebel literally busts all the stereotypes with an action-packed, fun and thought provoking bunch of movies exploring younger lives. Multi-award winning director Rima Das returns to LIFF with her must-see Bulbul Can Sing. Coming-of-age comedy The Lift Boy will have you falling off your seat, while the Roobha, and Kattumaram premieres present young lives struggling to find their own space in the system. In Chuskit a disabled Ladakhi girl fights for her education.

Extra-Ordinary Lives
True to the festival’s mission to screen films about real people’s stories, deep dive into our Extra-Ordinary Lives strand, back for a 2nd year, with amazing documentaries and dramas from across South Asia. An audience favourite at Cannes, we present the Mumbai romantic drama Sir, and the rollicking Hindi martial arts hit The Man Who Feels No Pain that delves into Tamil pop-culture in Mumbai, which won the Midnight Madness Audience award at TIFF. Don’t miss the tense Kannada whodunnit Arishadvarga, or the international premiere of unforgettably feel-good documentary My Home India (bring tissues).

Film, Power & Politics
This strand offers a critical insight into the fast moving political changes within South Asia. Toronto (TIFF), state of the Indian nation documentary, Reason by Anand Patwardhan; based on a true terrorist incident the compelling Bangladeshi drama Saturday Afternoon; Gandhian values black comedy #Gadhvi; and Kashmir-based Widow of Silence are a few films to look out for.

Special Guests
As usual, we expect a host of filmmaker Q&As and special guests with a highlight being the eagerly anticipated return of festival favourite director Anurag Kashyap, who has grabbed headlines with Sacred Games and Gangs of Wasseypur (our 2012 opening night film).

British maverick Gurinder Chadha OBE is in conversation to discuss her new film, Blinded by the Light, the Sundance hit about a British Asian Bruce Springsteen fan, which hits UK cinemas this August, and her ITV period drama, Beecham House.

Radhika Apte, star of our 2016 opening night film Parched, the much talked about Padman, and the global success Andhadhun, is due for a special event, based on her stellar work with Netflix, and hit films with Superstar Rajinikanth and Akshay Kumar.

Other talents expected are the popular Punjabi heavyweight Gippy Grewal who brings the generation gap social drama Ardaas Karaan set in Canada, which hits UK screens on general release on 19 July 2019. The Tamil stalwart actor director Mysskin who plays the protagonist in Kattumaram, is expected.

Cary Rajinder Sawhney, Executive & Programming Director of the festival says: “From the perspective of our 10th Birthday the festival has dynamically opened the UK mainstream media and audiences to Indian and South Asian independent cinema in all its linguistic diversity and that’s something we are extremely proud of. Punching above our weight as always, this year is probably our strongest programme ever with exciting world premieres, rarely seen archival masterpieces, and some seriously cutting-edge dramas and documentaries, in 23 venues across 5 UK cities and towns. We invite you to immerse yourself into the cinema of a billion lives.”

Alka Bagri, trustee of the Bagri Foundation says: “We are delighted to join LIFF in celebrating its tenth anniversary of showcasing the best in South Asian independent cinema! 2019 significantly marks five years of our support enabling filmmakers to show the diversity and vibrancy of the sub continent. We look forward to sharing with you a fantastic programme championing women filmmakers, emerging cinematic voices and Bengal’s unique contribution to cinema.”

Partners
We are delighted to welcome back our regular partners including Title Sponsor the Bagri Foundation for the fifth year in a row, that share our passion for Asian arts and culture. We also thank the BFI, awarded National Lottery funding, for their ongoing support of the Festival and enabling its expansion across the UK, plus our many other supporters. The festival also welcomes Thrive LDN for the first time, to produce two free entry short film screenings and talks that help de-stigmatise and explore mental health and well-being in Asian communities.

London and all cities: 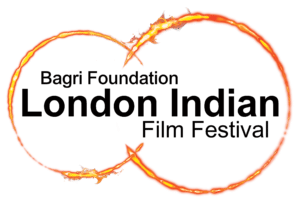