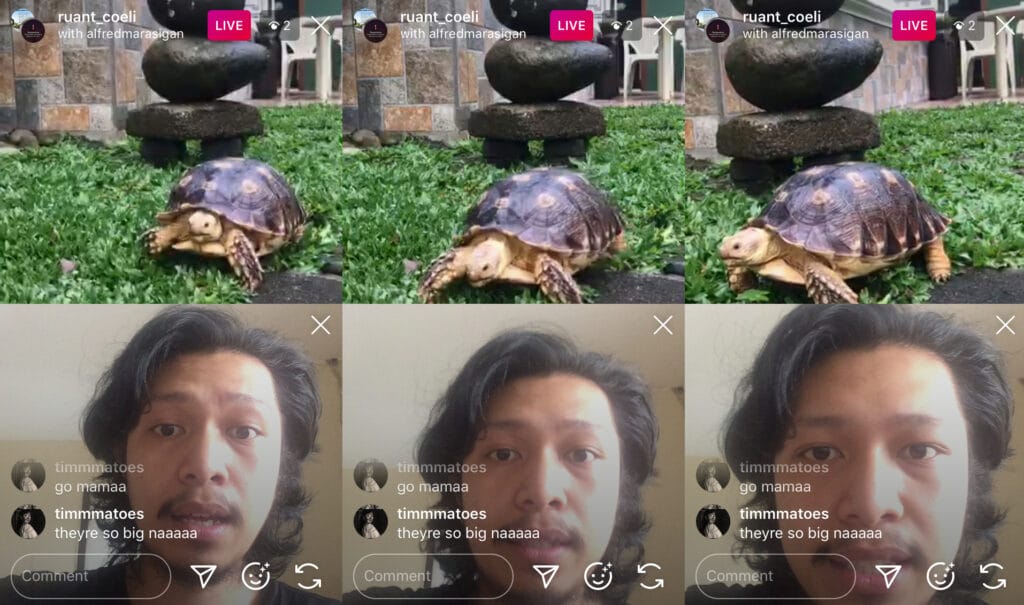 An Interview with Kang and Kong is part of artist Alfred Marasigan’s ongoing research on magic, virtuality, and belonging with livestreaming as medium. In collaboration with their civilian caretaker*, tortoises Kang and Kong’s presences will be broadcasted via a non-intrusive Instagram live moderated by the artist and hosted by Asia Art Activism (@asia.art.activism).

Compelled by the nebulous intersections between the artworld’s anthropocentric concerns, the intensely palpable climate crisis, the interspecies-induced pandemic, the consequent rise of and need for telepresence via Zoom, gaming, and various virtual communications, 2020’s prominent racial reckoning across all institutions, the enduring, mishandled, and politicized quarantine measures imposed by the Philippine government, Chinese astrology’s (四象) Black Tortoise of the North (玄武), Korean pop phenomena BLACKPINK’s semi-elemental-themed comeback, equatorial turtle migrations and their pan-cultural symbology, British Overseas Territory’s Saint Helena-based national 180-year-old icon Jonathan the Tortoise (Aldabrachelys gigantea), the southern hemisphere’s summer solstice, Norwegian slow tv, and the artist’s own frantic journey towards resituating oneself from the arctic to the tropics and reassembling home between countries alienated from each other in more ways than one, An Interview with Kang and Kong attempts to consult, through a ubiquitous format, one of the most enduring non-human animal species reach whose fates are inevitably intertwined with ours.

At their suburban, DENR-inspected** home of more than two years in Southern Luzon, the two tortoises (Centrochelys sulcata) may hold the answers to many complex questions about home, solidarity, and the futures we may never have. For 30 minutes to an hour at 5PM Manila time of October 31, online viewers are invited to listen in on the ensuing conversation and to participate via comments.

An Interview with Kang and Kong (Centrochelys sulcata) by Alfred Marasigan is part of Asia-Art-Activism’s programme Till We Meet Again IRL, Best Wishes, Asia-Art-Activism, 29 October – 29 November 2020. Supported by the Bagri Foundation.

Heavily inspired by emotional geography, Norwegian slow TV, and magic realism, Alfred Marasigan (b. 1992) conducts serendipitous research and transmedial practices primarily through livestreaming. Such format, often via social media, anchors his current explorations of simultaneity, sustainability, solidarity, and sexuality. Guided by time as storage, the moment as artwork, and self-evidence as knowledge, he orchestrates live collaborative ensembles of audiences, histories, actions, materialities, agents, and phenomena ultimately as ongoing efforts to create spaces for various makeshift, convoluted, and anachronistic Filipino queer narratives, among them his own. Marasigan graduated in 2019 with an MA in Contemporary Art from UiT Arctic University of Norway’s Kunstakademiet i Tromsø and is a Norwegian Council of the Arts Grantee for Newly Graduated Artists. Currently based in Manila, he is now a faculty member of Ateneo de Manila University’s Fine Arts Department for half a decade. His other artworks have also been exhibited, screened, and presented in Enclave Lab (UK), Tromsø Kunstforening (NO), Meinblau Projektraum (Berlin, DE), Arctic Moving Image & Film Festival (AMIFF) (Harstad, NO), Small Projects (Tromsø, NO), c3 Contemporary Art Space (Melbourne, AU), Galerie Métanoïa (Paris, FR), Cultural Center of the Philippines (Manila), Poh Chang Academy (Bangkok, TH), Metropolitan Museum of Manila (PH); and included in publications like Fordham University’s CURA Magazine, SFMoMA’s Tumblr, and Ateneo’s Heights, among others.